Scottie Scheffler delivers public snub to Cameron Smith, who is set to join rebel LIV Tour, as he walks on putting line
Advertisement 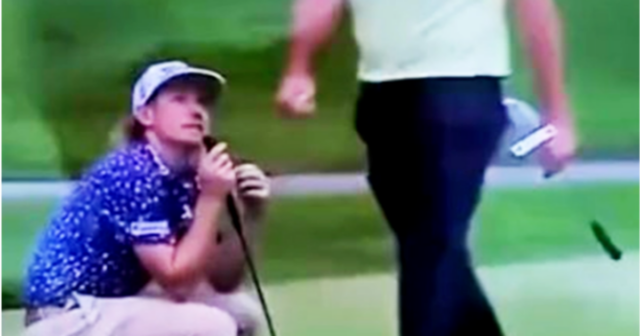 OUT of line or LIV with it?

Cameron Smith appeared astounded when Cameron Smith walked across as he prepared a putt at the PGA Tour’s FedEx St. Jude Championship

Despite the incident, the pairing of Scottie Scheffler and Cameron Smith in Memphis, Tennessee, otherwise went calmly

The public snub, as American Scheffler broke one of golf’s unwritten rules, stunned Smith during their first-round pairing at the PGA Tour’s FedEx St. Jude Championship in Memphis.

The Aussie, who was bending down to assess a putt, broke off from his concentrated look to gaze up at Scheffler.

Smith has swerved questions about whether he is defecting to the money-spinning Saudi-LED LIV tour.

And he seemed especially unhappy when quizzed on it immediately following his St Andrews triumph in July.

He said then: “I just won the British Open and you’re asking about that? I think that’s pretty not that good.”

And after a similar question came in he responded: “I don’t know, mate.

“My team around me worries about all that stuff, I’m here to win golf tournaments.”

Despite Scheffler’s startling action, he had earlier high-fived his rival for an eagle on the par-four 13th hole.

But his apparent decision to register dislike for Smith taking the Saudi millions won him plenty of support on social media.

One fan posted: “It’s getting physical now. Can the LIV dudes just pack and go.” Another said: “Nuanced golf dis. Love it.”

Shocked comments included: “This is basically golf’s version of throwing at someone’s head.”

A few fans did suggest Scheffler’s actions were not LIV related.

One such view was: “Wrong wrong wrong! Scheffler afraid Cam is gonna get some of his prize money.”

But that opinion was largely rebuffed as the Yank’s short walk across the green won approving words like “Beautiful” and “Love it”.