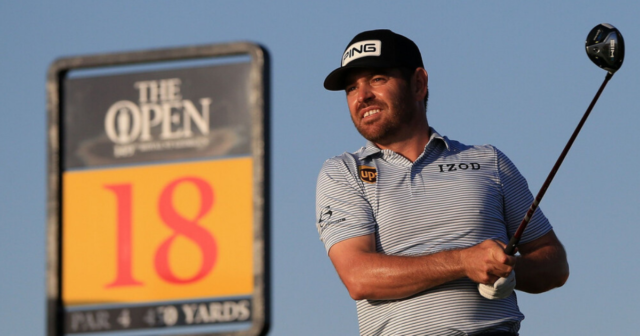 THE golfing world could finally be about to witness Shrek 2 after half a dozen false starts in the production process.

Louis Oosthuizen, affectionately known as Shrek because of his gap-toothed grin, has had to endure six runner-up finishes since he swamped the rest with a seven-shot Open victory at St Andrews in 2010.

But this time the South African ‘ogre’ is not putting the frighteners on the rest of the field, and he will have do it the hard way at Royal St George’s.

The two shot lead he built by playing the first two rounds in a record-breaking 129 shots is down to one, with the precociously talented Collin Morikawa breathing down his neck.

Morikawa, 24, bettered his playing partner’s one under par 69 with a gritty 68, so we now have two men in double digits below par.

And three-time Major winner Jordan Spieth is a couple of shots further back after another day when he left the punters wondering what was coming next – the brilliant or the bewildering.

Early in his round there was plenty of the razzle-dazzle that earned him those three quickfire Major victories – culminating in a thrilling Open triumph at Birkdale four years ago.

But two infuriating bogeys to finish his round suggested Spieth is still not quite back to his captivating best just yet.

Oosthuizen, 38, has always been happy to embrace the Shrek nickname, saying: “It’s the gap in the teeth.

“My friends say I look like Shrek – well, some of my friends – and you can’t choose what your friends think. So what can I say?”

But he did ditch the green ogre headcover that used to sit on top of his driver when a former caddie told him it was becoming more famous than its owner!

The volunteers who work the giant yellow scrobards at the Open were kept working overtime – as usual on moving day.

The amount of swapping and changing at the head of affairs was head-spinning, and with three holes to play there was a three-way tie at the top.

Oosthuizen appeared to be wobbling.

After carding just one bogey in the opening two rounds he dropped shots at both 11 and 13, and then failed to take advantage of the must-birdie par five 14th to join Morikawa and Spieth on 11 under.

But the Springbok battler edged clear again thanks to a superb tee shot at the short 16th.

And with Spieth frittering away shots at 17 and 18 he is a clear favourite to be sipping from the Claret Jug for a second time tonight.

But Morikawa clearly fancies his chances. He has already claimed one Major title at the first attempt, with his victory at last year’s USPGA.

No golfer has ever celebrated two winning debuts in the Majors. This is the young Californian’s first Open, so golfing history beckons.

Oosthuizen will not be too happy at the sight of Jon Rahm’s name high on the leaderboard, after the Spaniard – the hottest player in the game over the past few months – denied him the US Open title four weeks ago.

Rahm summoned up a birdie-birdie finish to charge past Oosty at Torrey Pines, and looks like he is ready to engage overdrive again.

He made a slow start here with a one over par 71, but rounds of 64-68 have hoisted him to within striking distance of a second come-from-behind Major victory.

The two men a shot ahead of Rahm, Corey Connors of Canada and American Scottie Sheffler, are relative newcomers to the business end of Majors.

Scheffler did manage a share of fourth behind Morikawa at the USPGA in his rookie year on the PGA Tour, but he is still waiting for his first win on the American circuit.

Conners is acknowledged as one of the best ball-strikers in the game. But his putting often lets him down when the pressure is really on.

That remark also applies to the second Canadian in the mix, Mackenzie Hughes

And Oosthuizen’s South African compatriot Dylan Fritelli has done precious little since he shocked everyone – including himself probably – by finishing fifth in the 2019 Masters.

In fact he has missed the cut in his last three starts, as well as two of three before that.

It is surely asking far too much of him to turn that sort of form completely on its head.

Advertisement. Scroll to continue reading.
Oosthuizen goes into the final round at the Open with a one-shot lead over Morikawa

World No1 Dustin Johnson and four time Major winner Brooks Koepka both made significant moves – but in the wrong direction.

So it promises to be a three-man race today, with Rahm as a dark horse.

But if the leaders falter, get ready for a Foinavon-style scramble for the finish.

Advertisement. Scroll to continue reading.
In this article:st andrews