PGA TOUR stars were forced to grin and bear it when a real life grizzly strolled across a fairway.

Golfers were shocked into stunned silence as the enormous mammal went about his business at the Barracuda Championship.

Bears are really common in the area and some local residents have even said there has been an “invasion” of them.

In the autumn of 2017 there were 14 reported bear break-ins at homes in the area.

The creatures can weigh up to 500lbs.

They might seem cute and cuddly but these golfers were wise to keep their distance. 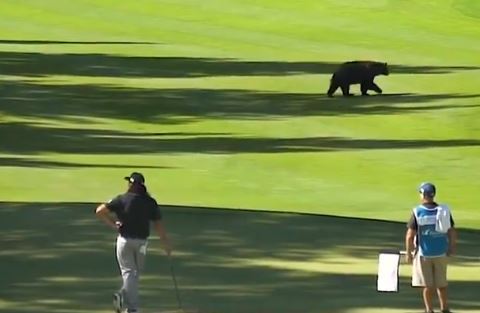 The bears are strong enough to easily rip a car door off its hinges and can run at 35 mph.

Snapping a spindly golf club is nothing in comparison to what they can do.

They venture out into the open for food mostly – but the birdies and eagles on offer on the golf course were probably not what they wanted.

And they haven’t yet started eating bogeys… we think.

Sightings of wildlife – not all of it friendly – is common on golf courses.

Back in October 2018 a giant 16ft alligator named Chubbs was seen in Florida.