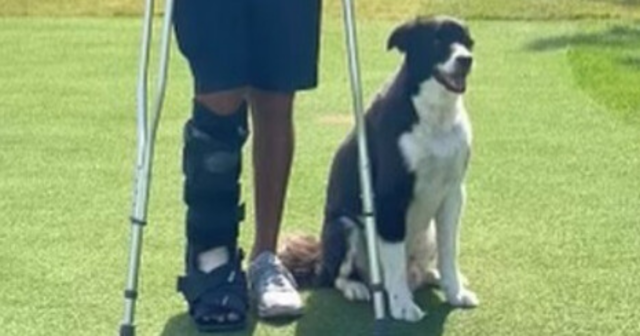 TIGER WOODS was back on a golf course for the first time since his car crash, watching his son Charlie compete at a junior event in Florida at the weekend.

The 45-year-old was seen in golf clothes and had a club in his right hand.

Closer look at the right leg from the posted source above. pic.twitter.com/lgbIgBtzs2

Woods also had a black sleeve covering the majority of his right leg, whilst his left leg remained bare.

The images of Woods watching his son play golf, alongside girlfriend Erica, are the first ones of him without crutches since his February 23 car crash.

The golf legend suffered severe injuries to his right leg, which most likely explains the sleeve, and required multiple surgeries.

One surgery even required the American to have a rod installed in his leg.

It is also still unclear whether Woods has plans to return to the PGA Tour, given the seriousness of the accident.

Team USA’s Ryder Cup skipper Steve Stricker did give a positive update hinting at a possible return to the course for the 15-time major championship winner.

“He’s a part of this Ryder Cup family, he won’t be able to be a captain’s assistant this time around just because of his ongoing rehabilitation to try to get better and try to play golf again, and that is going well.