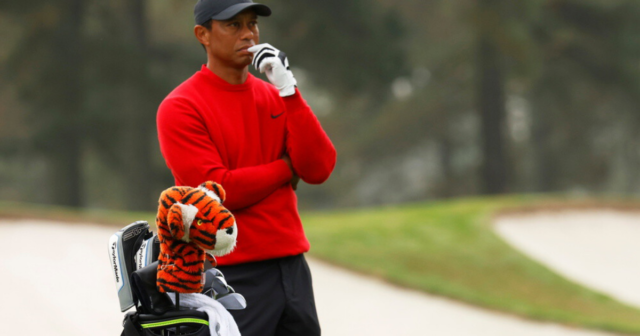 Woods knows he could not hope to compete with the world’s best golfers by next July, as his shattered leg will still not be strong enough for him to be anywhere near his best.

Woods is determined to compete at St Andrews next yearHowever, Woods faces an uphill battle to get fit as his leg is still restricted to minimal movement

But he says just returning to the home of golf would be another reminder of just how lucky he was to survive his 85 mph car crash in February.

Woods, who is hosting this week’s Hero World Challenge in the Bahamas, commented: “I’m lucky to be alive but also still have the limb. Those are two crucial things.

”I’m very grateful that someone upstairs was taking care of me, that I’m able to not only be here but also to walk without a prosthesis.

“I’ve had to go through a lot of pain, and even though I was able to walk into the room today without crutches, as I’m sitting here my leg still hurts. And my back hurts.”

Woods, who will be 46 next week, was asked how close he had come to having his right leg amputated, and replied: “Yeah, that was on the table.”

He was in far more positive mood when he was asked about his chances of teeing it up at the 2022 Open.

He grinned: “I would love to play at St. Andrews, there’s no doubt about it. It’s my favourite golf course in the world. To be a two-time Open champion there, just being a part of the champions dinner is really neat.

“So yes, I would love to be able to play that Open Championship, there’s no doubt about it. Physically, hopefully I can. I’ve got to get there first. The tournament’s not going to go anywhere – but I need to get there.

Woods revealed he has played a full 18 holes on a few occasions – but only from the forward tees!

He added: “As far as playing at the Tour level, I don’t know when that’s going to happen. Now, I’ll play a round here or there, a little hit and giggle, I can do something like that.

“To see some of my shots fall out of the sky a lot shorter than they used to is a little eye-opening, but at least I’m able to do it again.

“That’s something that for a while there it didn’t look like I was going to. Now I’m able to participate in the sport of golf – but to what level, I do not know that.

“Maybe one day it will be good enough where I can get out here, and I can compete against these best players in the world again.”

Advertisement. Scroll to continue reading.
In this article:st andrews