Tiger Woods reveals Muhammad Ali once punched him in a hotel lobby, leaving him ‘so pi**ed’ off
Advertisement

Gareth Bale vs Bill Murray vs Aaron Rodgers tale of the tape: Golf handicaps revealed ahead of Pebble Beach Pro-Am 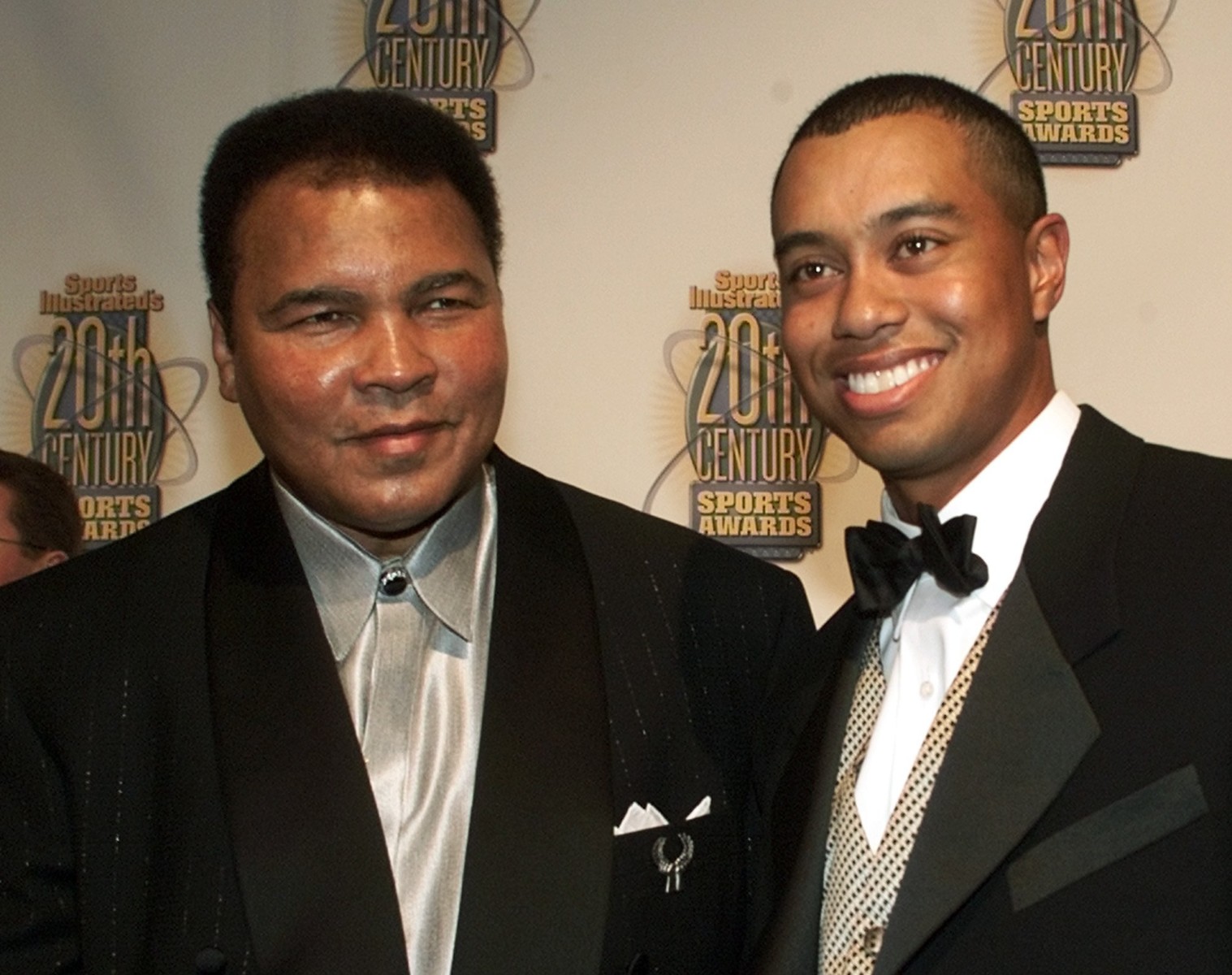 TIGER WOODS has revealed how Muhammad Ali once punched him in a hotel lobby.

The reigning Masters champion was checking into a Hilton to play a practice round ahead of the 2004 US Open at Shinnecock Hills in New York.

Woods was ready to knock out who ever gave him a sly dig – until he realised it was the late, great Ali

While at the front desk, legendary boxer Ali, who passed in 2016 at the age of 74, sneaked up on Woods and gave him a “love tap” in the ribs.

But the heavyweight king’s touch was so hard it left Woods “so pi**ed” off that he was ready to spark out whoever clobbered him.

It was only when he turned round that he saw it was the sporting icon – and understandably had second thoughts about throwing one back.

Woods, 44, recalled the unlikely encounter in an interview with Golf Digest, in which he also spoke of his love of darts and cricket.

The 15-time major champion said: “OK, well, I’ve met him [Ali] on several occasions. But this is when I went for a practice at Shinnecock. The year that Goose [Retief Goosen] won out there.

“I checked into a hotel, I believe it is where the Hiltons live, and so I’m checking in and I just have my backpack and literally my golf clubs.

“I’m just going up there for a day trip or stay the night and get up early the next morning and go play golf.

“I’m in line at the front desk and I get hit in the ribs, my right ribs. And it hurt.

“And I whip around and I’m thinking I’m just going to hit somebody. I was so pi**ed.

“I look around and it’s Muhammad Ali.

“I said, ‘Why did you have to give me a love tap that hard?’

“He was old but it still hurt. And I just can’t imagine being hit in a ring for 15 rounds like they used to fight back in the day. It’s just crazy.”

Asked if he contemplated giving Ali a little dig back, Woods said: “No, no, no, no. I was going to lose that one!”

Woods, who was recently described as being an “arrogant p**** when on the course by former coach Butch Harmon, also revealed his unlikely love of darts and cricket.

The world No 11 has been a globe-trotting superstar for more than 20 years, and says he takes in the traditional British sports when in Europe. 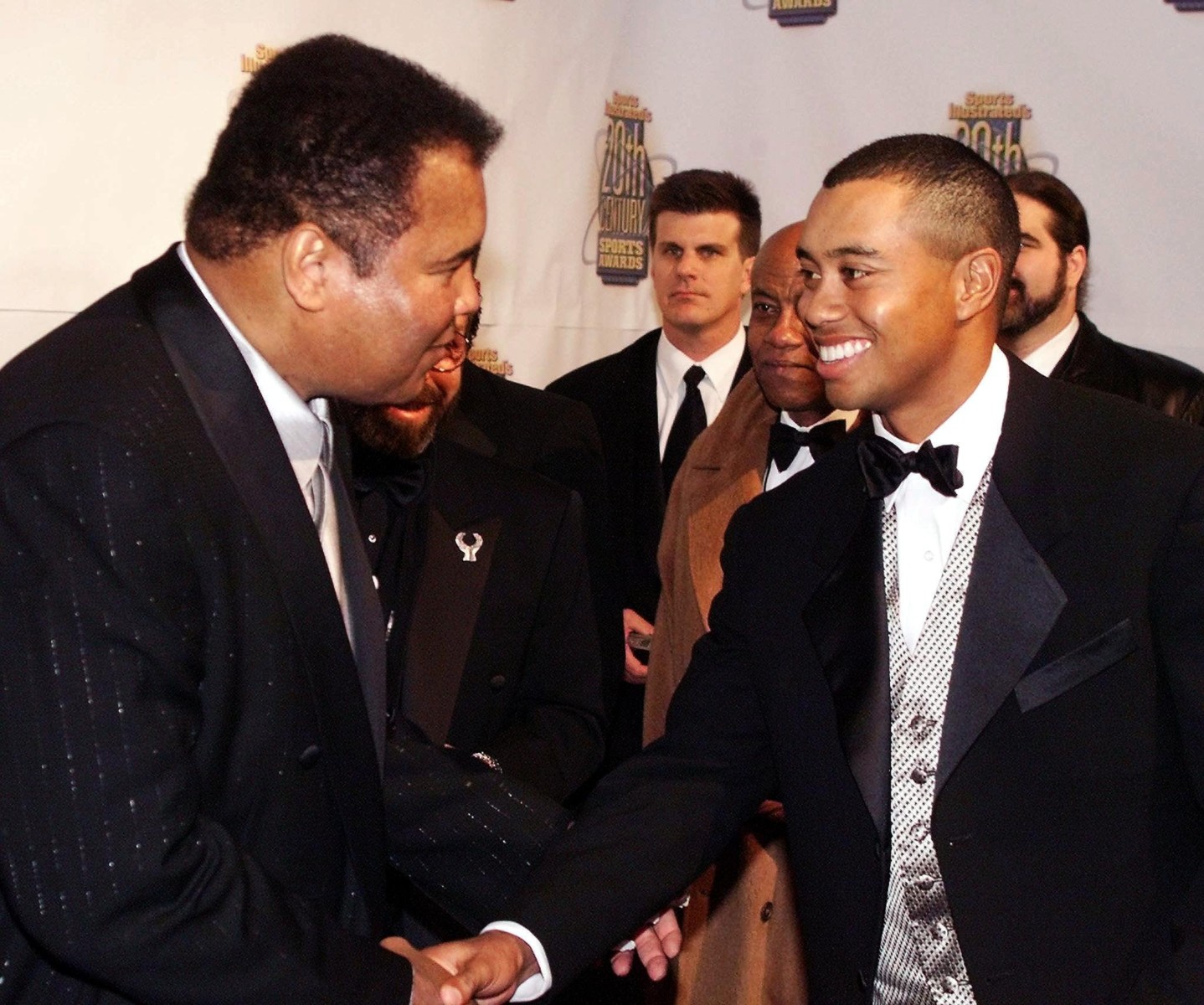 He said: “If I’m in Europe, I just talked to my daughter Sam this morning about it, we’re watching darts.

“They come out in the robes and everyone’s into it, throwing their darts and just having a great time. I guess it’s really fun to watch!

“Whether it’s playing in Australia or in the Middle East or even in the UK, cricket is pretty prevalent, so I watch a lot of cricket. I’d watch a lot of rugby too, for a number of years.”