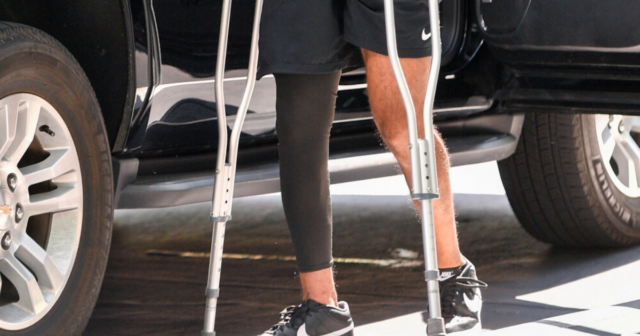 CROCKED Tiger Woods is still using crutches six months on from shattering his right leg in a serious car smash.

He was seen wearing a grey Nike t-shirt and shorts as well as a facemask as girlfriend Erica Herman accompanied him.

His right leg was covered up with a dark legging.

The 45-year-old golf ace had to be cut from the wreckage of the SUV he was driving on February 23 before being transferred to hospital by paramedics in Los Angeles.

Woods was travelling at 87mph, nearly double the speed limit, when he lost control of his car in Los Angeles and smashed into a tree.

Speaking about his recovery three months on in May, he said: “My physical therapy has been keeping me busy.

“I do my routines every day and am focused on my No1 goal right now: walking on my own. Taking it one step at a time.”

Back in April he posted a snap of himself in crutches with his leg brace and one of his beloved dogs.

He wrote: “My course is coming along faster than I am. But it’s nice to have a faithful rehab partner, man’s best friend.”