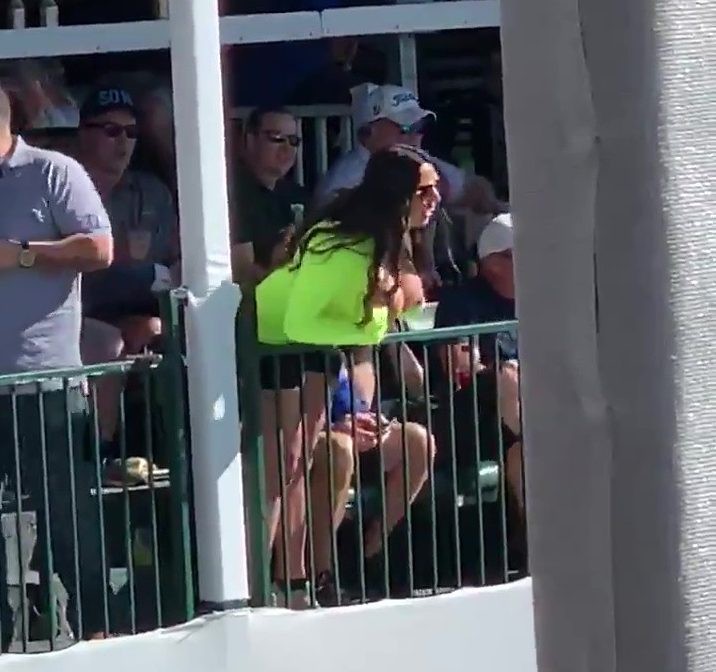 A BUSTY spectator did her best to putt off golfers at a PGA Tour event – by flashing her breasts from the stands.

The mystery fan engaged in her own fore-play on the green but it wasn’t enough to distract Webb Simpson from his own birdie at the Phoenix Open, at TPC Scottsdale in Arizona.

The American hit two successive scores of one stroke under Par to force a playoff with Tony Finau, before winning the 5.6million tournamenton Sunday.

With such a big purse at stake, the 34-year-old will be glad he kept his eyes on the fairway rather than the neon green shirt of a fan in the stands.

The unnamed woman delighted the watching crowd earlier in the day by exposing her chest to golf’s top stars as they prepared to take their shots.

Her wild antics were greeted by wild applause, while the players were forced to temporarily halt with one crowd member heard yelling: Hes dying, hes dying.

He is supposed to putt.

The video – which has gone viral on social media – then pans around the golfers before the fan pulls down her top once more.

And the spectator adds of the bemused golfers: No wonder he missed the putt.

The busty babe’s antics divided fans online, with some joking that the stunt was simply harmless fun while others were less than thrilled.

Twitter user Antonella said: Omg I need to do this at golf events!

But Art Vandelay argued: No place on the golf course for that type of behavior.

This is the second time the Phoenix Open has hit the headlines in recent years, with a drunk streaker interrupting the first day of play back in 2018.

The Pro-AM curtain-raiser to kick off the competition was brought to a dramatic halt when a naked reveller stormed the fairway.

Adam Stalmach dashed around the 17th hole with nothing left to the imagination before break-dancing moves on the fairway.