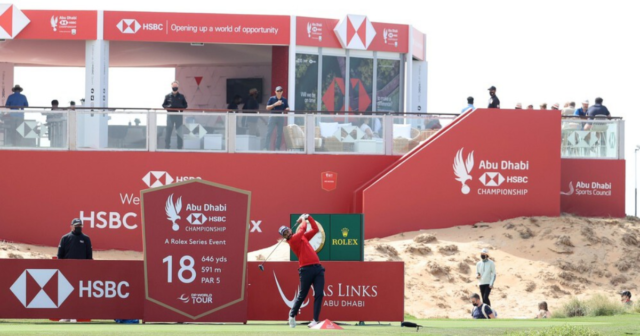 LEE WESTWOOD was left in disbelief after Santiago Tarrio pulled out a BACKWARDS shot at the Abu Dhabi Golf Championship.

And despite the Spaniard finishing way down in T68 overall at the end of the weekend, he clearly impressed Westwood with an epic bunker shot.

While at the par three 17th hole on the final day Tarrio could only fire his tee straight into the right green-side bunker.

But what happened next nobody could believe, as the 31-year-old Spaniard lined up to chip out of the bunker facing AWAY from the hole.

And he executed the shot perfectly, chipping the ball up into the air and sailing backwards, to land a matter of yards away from the hole.

Westwood was so stunned he reposted the shot on Twitter, writing: “That is impressive @santi_tarrio!!!”

And another wowed fan in the background can be heard claiming: “Oh my goodness!”

Tarrio was rightfully proud of his effort too, holding his arms aloft, nodding to the crowd and bowing down in front of them after pulling off the ridiculous chip shot.

Meanwhile another stunned onlooker gushed on social media: “Unbelievable to do this during a round!”

And another summed it up perfectly by simply writing: “This is awesome.”

However, Tarrio’s joy was short lived as he MISSED the close range putt for par following the superb set-up shot.

It summed up a frustrating weekend for the World No87, who finished on 7+.

Although the majestic trick shot did mean he ended the tournament on some sort of a high.

Three-time Masters winner Phil Mickleson has also used the same technique before, and is described by golf.com as the ‘innovator’ of the backwards bunker shot.