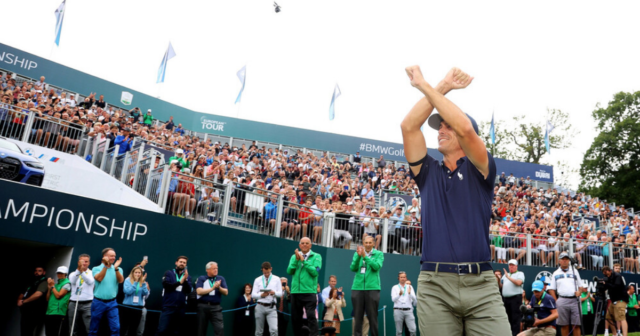 Horschel has the West Ham colours and crest on his golf bag, and he and Noble have become close friends

Billy Horschel showed his love for West Ham at Wentworth

Noble was in the crowd with Rice as Horschel’s brilliant final hole birdie completed a final-round 65, and gave him a one-shot win at the BMW PGA Championship.

The Irons skipper commented: “We’re so proud of him, and it was an honour to watch him win.”

Horschel finished £960,000 richer, and said: “Mark contacted me to see if we could have dinner together before we went back, and of course I agreed.

“It should be quite a celebration – and I don’t mind picking up the bill!”

The Florida golfer became only the second American to win Europe’s flagship event, after Arnold Palmer’s 1975 victory, and handed Ryder Cup captain Padraig Harrington a timely reminder of just how difficult it will be to beat the Americans.

Europe’s finest were handed a beating by a Yank who could not even make their team!

Horschel was snubbed by USA captain Steve Stricker when he announced his six wildcards last week, even though he is the reigning World Match Play champion.

He did not even get a call from Stricker to say he was not needed, and he admitted: “I didn’t play consistent enough, and well enough, after I won the Match Play to warrant a pick or to get enough points to get an automatic selection.

“I was a little gutted I didn’t get a call this week. I didn’t think the call was going to say I made the team.

“But I was a little gutted I didn’t get a call to say, ‘Hey, you know, you didn’t make the team’. In my mind, I thought I would at least get that, so there was a little more added motivation after that.”

A number of European players who couldn’t live with Horschel at Wentworth will be heading to Whistling Straits, however.

On a dramatic day of twists and turns in the final qualifying event, Lee Westwood, Bernd Wiesberger, Matt Fitzpatrick and Tyrrell Hatton were able to celebrate getting the final automatic qualifying places in the team.