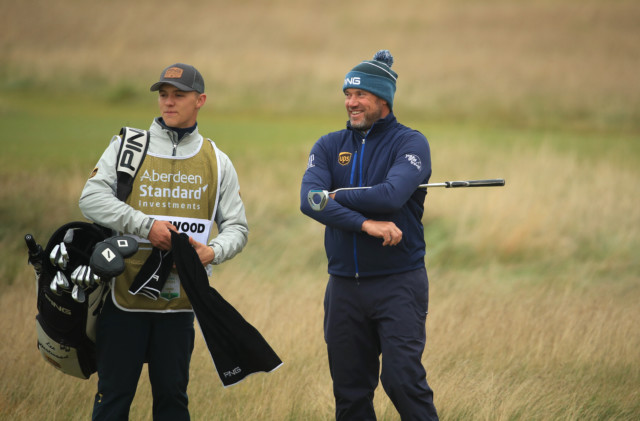 LEE WESTWOOD usually has his fiancee Helen Storey caddying for him as Major championships… but not this time.

The Englishman will have his 19-year-old son Sam carrying his clubs throughout the week instead.

Who is Lee Westwood’s son Sam?

Sam was born in 2001 and has a sister called Poppy.

Westwood has previously revealed that Sam initially had no interest in golf, but has very much grown into the sport now.

“Sam didn’t want to play golf for a while and I understand that,” Westwood said.

“But he’s really into it now and that’s helped me. He has been dragging me out at times when I might not have gone.

“And it helps me when I give him a lesson. He has learned by watching me swinging the club and has all the same faults, so it’s like giving myself a lesson.”

Why is Lee Westwood’s son Sam caddying for him?

Lee Westwood put his son Sam caddying for him down to a simple selection process, stating that Storey will be back doing tournaments with him later year.

“Helen is doing the PGA Championship and the Open, I think. I’m not sure about the Ryder Cup yet. We’ll cross that bridge if I get in the team.”

Westwood also gushed over the opportunity of getting to spend father-son time with Sam this week at Augusta National.

“I’ve got a fun couple of days coming up. I’m going to play Augusta with my son, Sam. Tomorrow’s going to be a good Monday,” Westwood said.

“It’s the first time he’s played there. He’s been there with me years ago, but he’s caddying for me this year in the Masters itself, so I figure I’m taking him to play 36 holes Monday and Tuesday.

“Be a good lads-and-dads trip. Looking forward to it.”