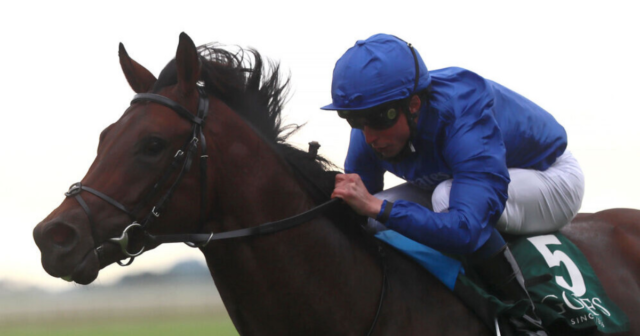 THE first Classic of the season is here and there is a strong favourite for the boys in blue.

But who does Templegate think will win the big race at Newmarket?

Can hot fav Native Trail do the business in the 2000 Guineas?

Read on for our man’s complete guide, back a horse by clicking their odds and find his big tip at the bottom.

SHADOW boxed. Peaked when winning the Coventry Stakes at Royal Ascot over 6f in June and finished the season well behind Native Trail in the Dewhurst here in October. Should see out this trip and yard in form but plenty to find on form.

DEEP Ocean. Beaten four times before a narrow maiden win over 1m2f at Leopardstown earlier this month. Looks well short of this standard but comes from super shrewd Jim Bolger who wouldn’t run him for the sake of it.

CHECK betting. Strong form on the all-weather including when winning a Listed contest over this trip at Newcastle on comeback. That was a good performance that gives him an each-way shout if he can perform as well making his turf debut.

CATCH the Bus. Bit of a wild card who we haven’t seen since his easy enough Group 3 win in the Autumn Stakes over course and distance in October. That built on his neck second in the red-hot Royal Lodge behind Royal Patronage. He travels strongly and trainer Charlie Appleby is adamant there’s loads more to come. Will be fit and looks a major player.

DUB sounds good. Clocked a big personal best when beaten two lengths by Native Trail in the Dewhurst here in October. Draw a line through his Breeders’ Cup run after that where he got himself wound up beforehand. A repeat of his last Newmarket run could carry him into the placings.

EY up. Was a revelation when winning the Listed Feilden Stakes easily on his turf debut here earlier this month. He stayed the 1m1f really strongly so no stamina doubts and he showed lots of pace too. Can outrun his odds and is one of the better outsiders.

LIGHT out. Two good wins so far including the Group 3 Horris Hill at Newbury when last seen in October. Went through the soft ground well there so should stay but needs to take a big step forward on form.

SAIL on. Won the Gimcrack over 6f last year and scored in hot company over that trip on the July course here. Stayed an extra furlong well when second to Perfect Power in the Greenham but a mile may just stretch him. Fast ground suits.

LUX is bright. Progressed well last season to win the Group 1 Futurity over a mile at Doncaster when loving the testing ground. That’s strong form and Aidan O’Brien has won this race ten times so knows what’s needed. Looks more of a Derby type but has enough class to go close.

NATIVE restless. Won all four starts last season including Group 1s over 7f here and at The Curragh in great style. Showed his wellbeing with an impressive Craven win stepped up to the mile earlier this month. He picked up really strongly and clearly loves this track. There should be more to come and he looks very hard to beat.

POWER surge. Scored over the minimum distance at Royal Ascot before taking Group 1 honours over an extra furlong at Deauville and in the Middle Park here. He returned with an impressive Greenham win where the seven-furlong trip was no problem. He shapes like he’ll stay and has loads of ability. Big each-way shout.

ON Point. Frankie rides for Aidan O’Brien which always catches the eye and he was a solid second to Native Trail in the National Stakes at The Curragh in September. He needs to improve to turn that around and he can’t be ruled out under the old master.

PAT on back. Chased home Native Trail in a maiden on debut and peaked when winning the Group 2 Royal Lodge here in September. Was kicked during the Futurity Trophy so ignore that final run. He is a proven stayer who deserves his place but needs more.

BAY sunk. Was green when second in the Free Handicap here on comeback. That was a good performance and he’ll win plenty of races but major improvement is needed for this.

THE WIZARD OF EYE 2

WHY Eye. Wasn’t disgraced in good races last season and only three lengths off the pace in the Greenham on comeback. He’s a big price on that performance but needs a fair bit more to figure in this class.

NATIVE TRAIL has yet to taste defeat and kicked off the season with an impressive Craven Stakes win here 17 days ago. He showed the sharp turn of foot that saw him win a pair of Group 1s as a two-year-old. Charlie Appleby and William Buick have made a strong start to the season and can bag the opening Classic.

Perfect Power was impressive when stepping up to seven furlongs to take Newbury’s Greenham Stakes in style. He shapes as though he’ll get the mile and can hit the frame.

Appleby has another good chance with Coroebus who hasn’t run since his Autumn Stakes win here in October. The canny trainer expects big things from him this year.

Aidan O’Brien is looking for his 11th 2,000 Guineas win and Luxembourg won a key trial for this in the Futurity Stakes at Doncaster in October. He’s respected, while Frankie has an each-way shout on Point Lonsdale who will improve for this longer trip.

Advertisement. Scroll to continue reading.
In this article:ishere, thefirst, theseason