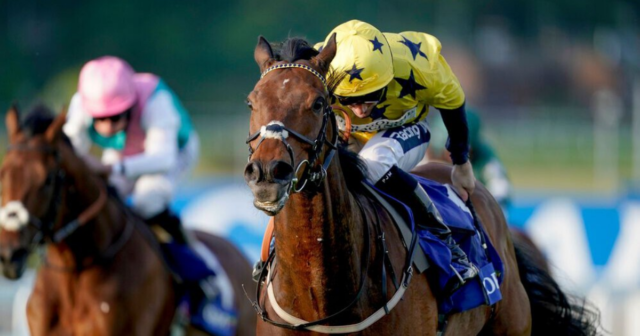 EUCHEN GLEN is steadily building one of the biggest fan clubs in racing.

And his trainer Jim Goldie is sending his star on a 1,000 mile round trip in the hope of landing another big pot and some more admirers.

Euchen Glen has won twice at Sandown this season already

His horsebox left Goldie’s East Renfrewshire base on Wednesday night to ensure he gets a day to recover from the ten hour trip.

But Euchen Glen has racked up enough air miles in his time to shrug off any travel woes.

A win in Goodwood’s Group 3 Glorious Stakes would take the eight-year-old to just shy of £500,000 in career earnings.

Goldie said: “He set off on Wednesday night. That way it’s cooler and you miss all the traffic you’d usually bump into down south in England.

“He’ll stay at the track and that way he has a day to recharge. But he’s done it all before, he travels so well and that’s why we can target these races.

“I’ll be staying up here, he seems to race better when I’m not there! And I can orchestrate it all from here anyway.

“He’s just a superstar, people are really taking to him and we love Goodwood. Last year he went for the two-miler but this will suit better.”

Euchen Glen has already dented some big reputations on two trips down south and proud Scot Goldie is bullish he can make it number three on the Downs.

He takes on Mogul of Aidan O’Brien as well as Passion And Glory and Outbox with Goldie hoping for a bit more rain.

He said: “We’ve got to carry a penalty and O’Brien’s horse is well in at the weights.

“But we’ve had all that before and if he runs like he did at Sandown and puts those kinds of numbers up then we’d be the one to beat.

“A bit more rain would be nice so it’s not sticky, that’ll suit us more than others I think.

“We thought about the King George for him so if we were thinking along those lines then we’d hope for another big run here.”

With the opposition hopefully covered, Goldie is more concerned about his jockey Paul Mulrennan.

Euchen Glen’s long-time partner had to starve himself to make the weight for his rides at the all new Racing League on Thursday. And that’s not the only bug bear Goldie has with the competition.

Goldie said: “The thing I’m most worried about is my jockey. Paul has to get down to 8’11 for two of his rides which would have been a real struggle.

“So he’d have not eaten and then has to drive all the way down to Goodwood the next morning and that’s a tough ask.

“There are a lot of unhappy trainers with the Racing League, it just doesn’t seem too well thought out.

“Like for me I’ve got Nicholas T who has won the most amount of prize money at Newcastle this year after the Northumberland Plate.

“There aren’t any races for him as it’s a 0-90 and I’m not in it anyway, but surely it’s horses like this that should be fighting it out for £50,000. Good horses draw in the crowds.

“I want to run him in the Ebor and that means we need to win another race with him for a penalty.

“So I’ll have to run at another ARC track with the winner probably getting less than £10,000.

“I’ve spoken to the NTF about it and I know lots of others have. I don’t want to complain too much about it just yet but it seems just a bit rushed, let’s see.”