A freak vs a monster: Who will win as Shishkin takes on Energumene in battle of the ultra-rich owners at Ascot
Advertisement 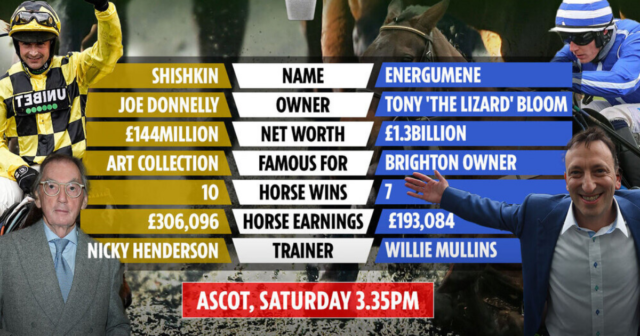 IT is being billed as the best race over two miles for the past 20 years.

And despite being hyped as the must-see head-to-head clash of Cheltenham Festival, Ascot will instead get the fireworks two months early when Shishkin and Energumene do battle on Saturday.

One has been there and done it at the Festival, the other is yet to prove his worth on the biggest stage of all.

Both are unbeaten over fences, have earned their owners prizes in the six figures and are the star attraction wherever they go.

Four will line up for the Clarence House Chase at 3.35pm at Ascot on Saturday.

But really it’s only about Shishkin – who’s been labelled a freak – and Energumene, the monster who could take him down.

The former is owned by bookie-turned-art collector Joe Donnelly and wife Marie.

You might recognise their famous black and yellow silks.

They were worn to two Gold Cup victories by Al Boum Photo.

The latter is owned by The Lizard – Tony Bloom, the ‘cleverest man to ever place a bet‘.

Owner of Brighton, Bloom is a self-made entrepreneur with a net worth estimated to be more than a billion quid.

Racing is not exactly short of owners with deep pockets.

But the beauty of this race on Saturday – for which Shishkin is 8-13 favourite and Energumene 15-8 second fav – is that it really is all about pride and bragging rights.

The super-talented Shishkin has already achieved at the highest level
Advertisement. Scroll to continue reading.

Who will get the upper hand heading into Cheltenham, where the eyes of the racing world will be on the Champion Chase, one of the week’s biggest races?

Who will inflict the first defeat on the other over the biggest obstacles?

Who will draw first blood in a rivalry which could possibly last years?

Three weeks earlier Energumene – which in French means a person possessed by an evil spirit – won at Cork in Ireland, scooping the £34,329 prize with ease. 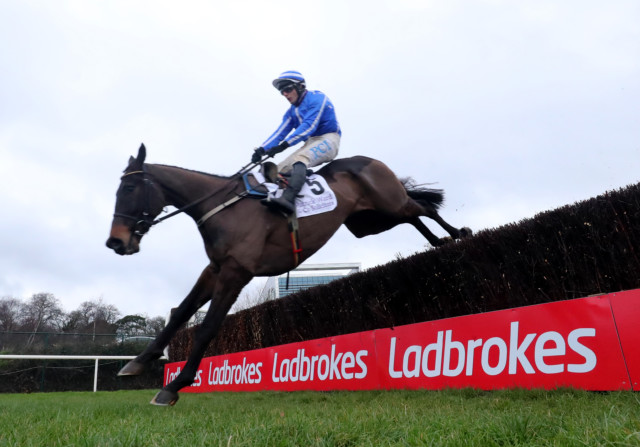 But this will be the horse’s first start in Britain and he’s run in three fewer races over the course of his career under rules.

The winner on Saturday will take home £85,425 – small fry for Bloom and Donnelly, whose worth an estimated £144m.

And greater riches await at the Festival.

But for once it’s not about cash.

It will be a cracker.