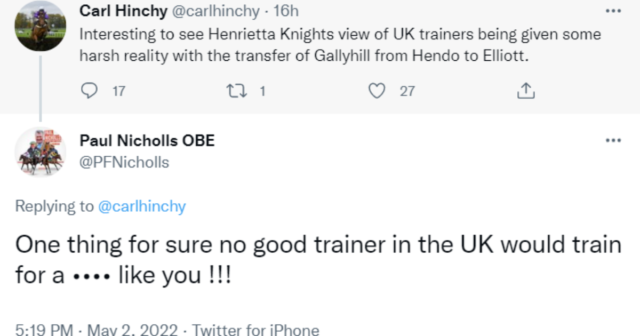 Nicholls, 60, who was made an OBE by Prince Charles and trains horses for Sir Alex Ferguson and Dame Judi Dench, left his followers stunned with his message on Sunday evening.

The trainer was replying to a message from Carl Hinchy, a trained solicitor who recently showed off some of his huge betting wins over the years.

Hinchy made note of Gallyhill’s victory at Down Royal on Sunday – a horse who looks to have been rejuvenated since moving to Gordon Elliott from Nicky Henderson.

He wrote: “Interesting to see Henrietta Knight’s view of UK trainers being given some harsh reality with the transfer of Gallyhill from Hendo to Elliott.”

To which Nicholls replied: “One thing for sure no good trainer in the UK would train for a **** like you!!!”

Many of Nicholls’ 140,000 followers couldn’t believe what they had seen.

One said: “Shots fired from the champ!”

Another commented: “Big Paul getting stuck right in.”

While others suggested Nicholls had inadvertently dissed fellow trainer Christian Williams with his comment.

Hinchy tweeted a response to Nicholls’ comment – though not directly as he had been blocked by the Ditcheat supremo.

He said: “I won’t be rising to this but I agree it’s not very classy and sad it’s from a chap I’m such a huge admirer of.”

Hinchy later posted this message in which he said he had been blocked by Nicholls
In this article:damejudi, onsunday, siralex