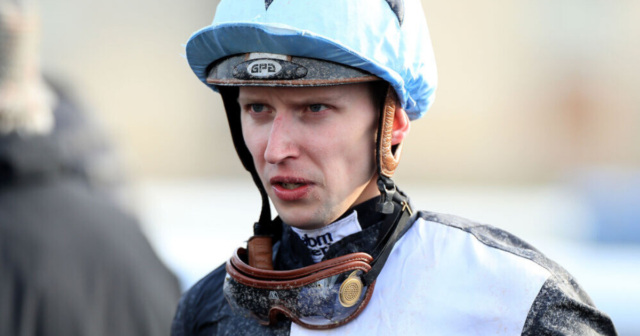 JOCKEYS are seen as super human. They are not. That’s why mental health issues are so important in 2022.

That said, the pain tolerance of riders is beyond most of us can comprehend.

It might be one of the cliches of the sport that jockeys are in a rare profession in which an ambulance follows them while they are work.

But it’s the simple truth.

With that in mind spare a thought for Flat performer Alistair Rawlinson, who hopes to pass a fitness test next week which will get him back in the saddle in the very near future.

Rawlinson could have lost his ankle in a pile up last year. Luckily he hasn’t. All he wanted was to be able to play as a normal dad with his little boy. Pure determination means soon he can do that and go back to the day job he loves.

I was working for Sky Sports Racing at Windsor on June 7 when Rawlinson’s mount Diligent Lady fell heavily in the 5f handicap and badly hampered Centurion Song, who unseated fellow rider George Buckell in the process, with Diligent Lady sadly suffering a fatal injury.

There was a significant delay to racing while both jockeys were treated on track before being taken to hospital by ambulance.

While Buckell, who claims 3lb, escaped without any serious injuries, Rawlinson was not as fortunate.

Taking up the story, Rawlinson told me: “Where do you want me to start? In the fall I had four fractures of my ankle. The dislocation was reduced on track which saved me.

“I also had four fractured ribs and heavily bruised hip.

“As a result, I ended up with two operations to my ankle to place plates, screws and wires.

“Then there was surgery to remove screws and wires on December 6.”

Full of praise for the Windsor team, Rawlinson continued: “If they hadn’t got the dislocation back in place on track I could have lost my ankle. There was also a high chance I might not have been able to return racing.

“I spent ten days in hospital. It wasn’t easy but I never thought about anything but coming back.”

Rawlinson added: “I have so many people to thank from Callum Clarke the surgeon to Jerry Hill at the BHA and all the team at Peter O’Sullivan house. Ross, Glen, Emma and Becky all work there and know who they are. Without them I wouldn’t be returning to the job I love.”

Rawlinson started his rehabilitation process on August 4 and has continued ever since. It was crucial to bring back muscle to the operated leg.

“I’ve used the hydro pool which has been a massive help in the recovery and without it wouldn’t be where we are now,” he said. “Obviously the simulator and everything in the gym was used to cover every basis of the body.

“It’s been a long road I never once doubted I wouldn’t return that’s just the mentality of myself. The main objective was to have a normal life, being able to play with my three-year-old boy (William) and general day to day things. I think that kept me driven more then anything else.

As far as today’s racing is concerned, it’s one of those Saturday’s where there is plenty of good action without a Shishkin being on show.

At Warwick the Ballymore Leamington Novices’ Hurdle has Grade 2 status and looks wide open with the promising Surrey Quest the likely favourite for Nicky Henderson and Aidan Coleman.

Party Business goes for Ian Williams under Charlie Todd, and the Eventmasters Racing-owned son of Shantou provides a decent formline to the impressive Stage Star.

The latter hacked up in the Grade 1 Challow at Newbury last time, but Party Business was far from disgraced in second when he fell two out. Stage Star supporters will expect a bold show here.

At the age of twelve Achille is not the most obvious contender for those looking for an improver.

That said I think he has great eachway claims.

Venetia Williams’s charge was second last year, and has run two crackers this season, finishing fourth in the Welsh National and fifth in the Becher at Aintree. Oddly he has been dropped 3lb since Chepstow and that means he has fabulous place claims at the very least under Charlie Deutsch.

I’m just hoping age is not his achille’s heel!