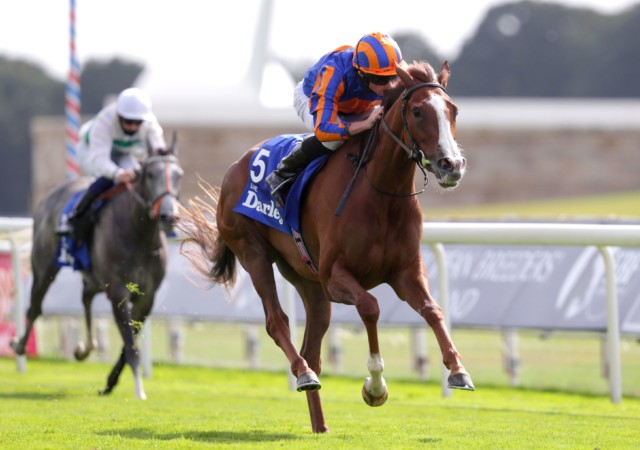 AIDAN O’BRIEN star Love is set to return to action next weekend.

The crack filly was unbeaten in three starts last season, all of which were in Group 1s.

She was a warm order for the Arc before disaster struck and the O’Brien runners were forced to withdraw after they ate a dodgy batch of feed.

All roads lead back to Paris with Love, and O’Brien has pencilled in next Sunday’s Tattersalls Gold Cup at the Curragh for her comeback.

He said: “We’re looking at the Tattersalls Gold Cup with Love.

“It’s not been totally confirmed yet. But that’s what we are looking at, and we’ll make a final decision closer to the time.”

Love struck in last year’s 1000 Guineas and followed that up in the Oaks at Epsom to complete a Classic double.

She then went on to York where she bolted up in the Yorkshire Oaks.

And the bookies already have her as the clear antepost favourite for this season’s Arc at Parislongchamp at 7-1.

Mishriff is at 8-1 with similar prices around for Dermot Weld’s Tarnawa.

This year’s 1000 Guineas winner Mother Earth, also trained by O’Brien, is the hot favourite for the French equivalent this weekend.

O’Brien also has St Mark’s Basilica in the French 2000 Guineas after they bypassed Newmarket. He takes on Poetic Flare who won that race.

Did you miss our previous article…
https://www.sportingexcitement.com/horse-racing/top-racehorse-trainer-liam-bailey-fined-for-truly-shocking-and-violent-incident-with-female-employee-at-stable