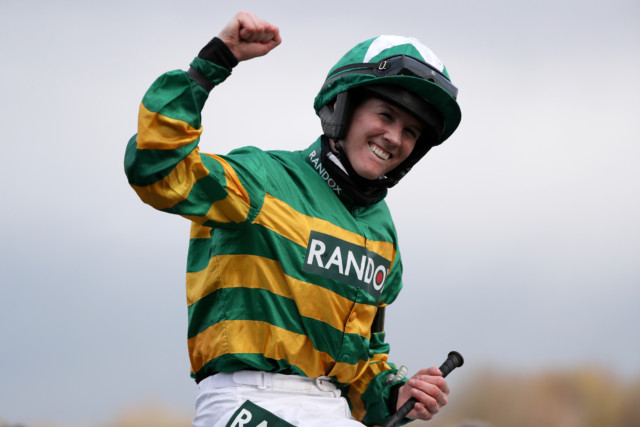 The Aintree heroine has been cut into strong odds-on for the gong at the end of the year.

Blackmore will next be in the saddle on Tuesday at Fairyhouse

Bookies Ladbrokes have her as their 1-2 favourite after she became the first female jockey to land the big one.

Blackmore made headlines around the world and still has the chance to cap her memorable season by becoming Irish champion jumps jockey.

The 31-year-old has even been mentioned for the main award at the BBC SPOTY ceremony, but eligibility rules look set to see that go elsewhere.

The overseas award has been won by the likes of Cristiano Ronaldo, Roger Federer and Usain Bolt in recent years.

Aussie George Moore is the only racing figure to win the trophy.

Despite it being an Olympics year, Ladbrokes already have Blackmore chalked up as their red-hot jolly.

Jessica O’Reilly of Ladbrokes said: “Blackmore is an incredible athlete and with more success almost certainly on the horizon following Cheltenham and Aintree, it looks like she will be crowned as this year’s overseas SPOTY winner too.”

Blackmore returned home to Ireland yesterday but was denied a celebration due to COVID.

She’ll next be in the saddle at Fairyhouse tomorrow as she attempts to become Irish champion jumps jockey.

She is ten wins behind Paul Townend, but he faces a spell out with injury.