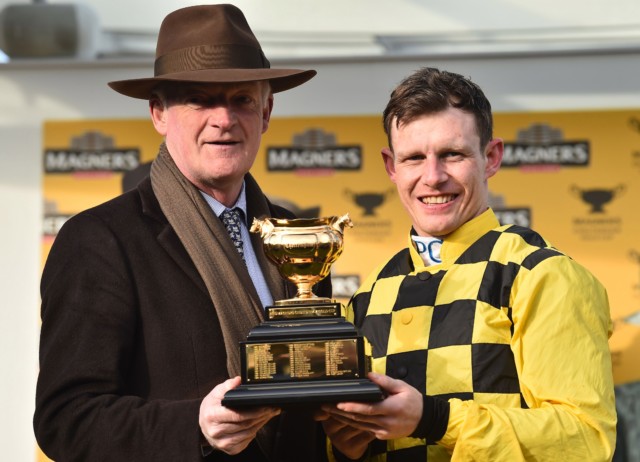 AL BOUM PHOTO is all the rage ahead of the Wellchild Gold Cup at the Cheltenham Festival.

Punters reckon Willie Mullins’ ace will land a third on the spin as the bookies continue to shorten the Irish star.

The likes of Coral and Betfair go as short as 5-2 for Al Boum Photo to take main event despite Champ’s encouraging return at the weekend.

Nicky Henderson’s star is now his main challenger according to the bookies at 5-1.

And the market is slowly developing into a two horse race. A Plus Tard is solid at 13-2, while Kemboy and Royal Pagaille are both 8-1.

However, the latter two could head elsewhere during the week.

Coral’s John Hill, said: “Only a handful of horses have won the Cheltenham Gold Cup on three occasions but Al Boum Photo is the favourite to join that club when he returns to Prestbury Park for the Blue Riband event of the meeting.

“Champ is the biggest challenger to Willie Mullins’ runner according to our betting. They’ve been our two in the betting.

“We expect him to come on from that return to action at Newbury last weekend, while he should have no issue with the hill at Cheltenham going off the way he powered up it to land the RSA Chase in 2020.”

With the last Gold Cup hopefuls stating their case over the past weekend, the market is beginning to take shape.

Lostintranslation, Cyrname and Master Tommytucker all failed to land a significant blow at Newbury and Ascot.

Willie Mullins and Paul Townend will be as happy as they can be with just over two weeks to go.