WHO said you need Alcohol to have a good time?

That being said, there will be plenty of sore heads at Andrew Balding’s Kingsclere yard this morning after his Alcohol Free won the £1 million Sussex Stakes.

Alcohol Free was an impressive winner of the Sussex Stakes

The brilliant filly has turned up at all the big gigs this summer and she saved her best for the feature race on day two of Glorious Goodwood.

She suffered a shock defeat at the hands of Snow Lantern in the Falmouth Stakes at Newmarket just 19 days ago.

But there was clearly no hangover from that demoralising loss as she thumped a top-class field to bag the third Group 1 of her career.

Palace Pier aside, every miler worth their salt in Britain and Ireland had turned up for the Sussex.

There was very little pace in the early stages, and as the rest of the field played bumper cars, champion jockey Oisin Murphy was able to get Alcohol Free settled in the perfect position.

James Doyle injected some speed into the contest on Century Dream at the top of the straight, but he was soon pegged back by hot favourite Poetic Flare.

The 2000 Guineas hero was electric in the St James’s Palace at Royal Ascot, but this time he couldn’t put the race to bed and he was soon in Alcohol Free’s crosshairs.

When Murphy said ‘go’, she powered clear, leaving a punch-drunk Poetic Flare in her wake.

A usually sober Balding couldn’t hide his emotions after the race, and neither could Alcohol Free’s proud owner Jeff Smith.

The pair have had plenty to toast over the years, but this filly could be the best they’ve ever had.

Balding said: “She is a privilege to train. She can be a little highly-strung but she has just been sensational since day one.

“We have to chop and change her lead horse at home everyday because she beats everything effortlessly, we don’t want the other horses in the yard to get demoralised.

“It was a messy race and I was calling Oisin all sorts of names when he was trying to get her some cover!

“She switched off and showed unbelievable class. I think she was easily the best horse on the day. We have always believed in her.”

Alcohol Free battles to the win in the Qatar Sussex Stakes

A 30 year wait for Jeff Smith is over!

Smith’s famous purple and light blue colours have been carried by some champions over the years, including Chief Singer who won the Sussex in 1984.

Smith joked: “When I last won this race I had jet black hair and no worries in the world and thought this game was easy. I’ve taken my time winning it again.

“This filly is something else and the way she has won was incredible. You could argue she would be unbeaten if things had fallen right for her.

“It was a pretty rough race but she is an absolute champion.” 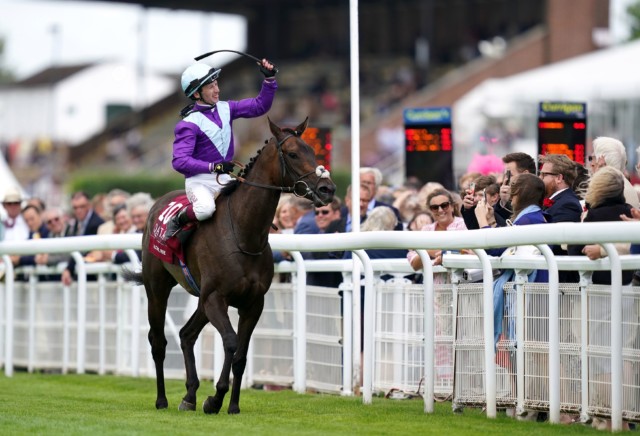 Oisin Murphy was over the moon after Alcohol Free’s win

But no-one was as giddy as the man on top.

Murphy has ridden Alcohol Free in all bar one of her starts, and he thinks the best is yet to come.

He said: “I’m over the moon, she was incredible today and gave me a great buzz. I think she is only getting better.

“The Sussex is one of the most prestigious races of the season and to win it on this filly for Andrew and Jeff is amazing.

“There was no pace in the race, I managed to get her relaxed but the race was a bit stop-start. It was a slog to the line but she was very good and very tough.

“She has run at Ascot, Newmarket and here all in quick succession. It takes a brave horse to do that.”

Balding is having a season for the ages and he now has the trainers’ championship firmly in his sights.

He said: “We’ve been having a brilliant season, things have been going great and fingers crossed the horses stay happy and healthy.

“That was a milestone win. It’s important to win these big races and this is a very special day.”

As for Poetic Force, he lost nothing in defeat and the Jim Bolger team will now lick their wounds before deciding where to run next.

Veteran jockey Kevin Manning put his performance down to the soft going – it will be good or faster from here on out for the three-year-old.

Manning said: “I think the ground blunted his speed. He was racing behind the bridle a bit where he’d normally travel strongly off quick ground.

“He dug deep in the final furlong but it just felt like I had spinning wheels on the ground.

“We’ll learn our lesson and avoid that sort of ground going forward.”