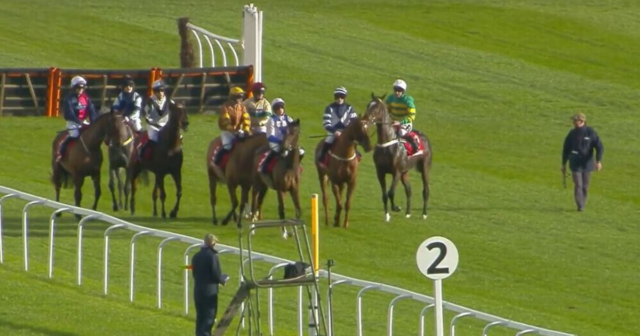 ALL eight jockeys were questioned by stewards as part of an urgent probe into an ’embarrassing’ race that saw NONE of the horses want to run.

Angry punters demanded the jockeys be fined for the farcical scenes, as for almost a minute the horses stayed virtually motionless at the start.

All the runners and riders stayed virtually motionless at the start for almost a minute after the race had officially begun
The jockeys appeared to be looking at one another, waiting for someone to actually get racing

The 1.15 at Newbury on Friday was hyped for being the debut run over hurdles of the record-breaking £570,000 horse Jonbon.

But punters were left begging the horses to actually run as all eight waited for one to get going.

The starter’s flag had gone down and the tape lowered indicating the start of the race.

But ITV commentator Richard Hoiles fumed it was ‘rather daft’ that with 30 seconds gone no horses had actually galloped off.

He said it was ‘very unusual’ and that it was ‘horse racing in inverted commas’.

The race was eventually won by Jonbon, who saw his odds for the Supreme Novices’ Hurdle at Cheltenham Festival get slashed to 3-1 favourite.

But it was perhaps remembered for all the wrong reasons, with all the riders being hauled before stewards to explain themselves after the race.

The official stewards’ report on the BHA website read: “An enquiry was held into the start of this race to consider why, once the Starter’s flag had been dropped signifying that the race had started, almost a minute had elapsed before the runners began to race.

“The riders all explained that they had been instructed to drop-in and take a lead.

“Their explanations were noted and the riders reminded of their responsibilities to begin the race once the start had been effected.”

However, that slap on the wrist is likely to appease punters, who couldn’t believe what they had seen.

One fumed: “This is embarrassing. Every one of them should be fined.”

Another said: “Quite frankly embarrassing and anyone who argues otherwise is deluded.

“Very poor from all concerned, not a good image.”

While one joked: “And the going at Newbury is NO!”

This is the second time this week that a significant number of jockeys have been interviewed by stewards after a race.

Some 12 riders were brought before chiefs following a ‘complete farce’ of a race in Ireland.

All Class landed a huge gamble in the 12.30 at Punchestown on Tuesday after being backed from 13-2 into 13-8 before the off.

The Ronan McNally-trained mare, who finished 71 lengths behind the leader on her previous run last month, won the 3m1½f handicap chase by 23 lengths.

Runner-up Capture The Drama finished a further 19 lengths ahead of third-placed Jimli’s Island, who was fully 42 lengths behind the winner.

The bizarre contest – which saw the runners totally strung out – was labelled a ‘complete farce’ by McNally, even though he benefited more than anyone.

Punters were left in stitches to this start to a Newcastle race earlier this year where again the jockeys appeared reluctant to race. 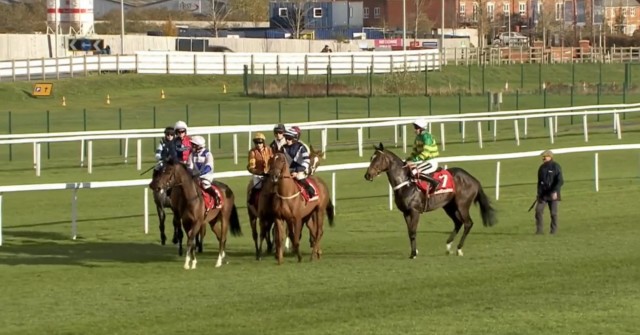