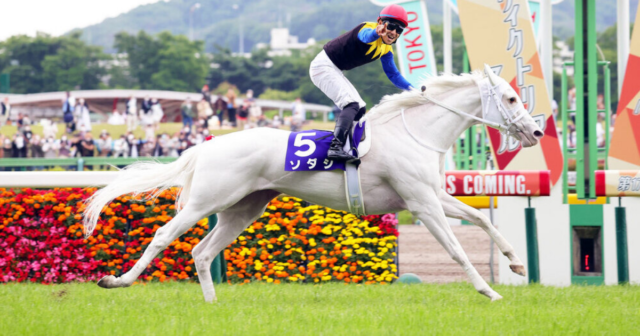 The utterly mesmerising four-year-old filly – nicknamed ‘White Wonder’ – won just shy of £860,000 for connections with victory in the Grade 1 Victoria Mile in Japan.

The roar of the crowed rose 100 fold when Sodashi launched into her stretch drive. Very much a fan favorite. Now to convince her to come to the @BreedersCup pic.twitter.com/r7aaRVCkYO

Could we see Sodashi at @keenelandracing this November?

Sodashi is already a cult icon in the Far East for her unique colouring, and has her own dedicated YouTube stream.

Footage from when she crossed the line under jockey Hayato Yoshida at the Tokyo racecourse showed the giant crowd in raptures.

With six wins in ten races, Sodashi, who has also been labelled the ‘unicorn horse’, has turned into a money-making machine for super-rich owner Makoto Kaneko too.

Sodashi’s victory in the Victoria Mile means she automatically gets a spot in the Breeders’ Cup Filly & Mare Turf at Keeneland in November.

That race last year was won by another Japanese horse, Loves Only You, and victory brought with it a cheque for more than £750,000.

Her dam was another white mare Shirayukihime, which translates as ‘Snow White’.

Sodashi’s most recent win at odds of around 5-1 came on the back of a mass betting bonanza in the big race.

Turnover for the race was up to £125m – some £20m higher than the year before, when Gran Alegria won.

But even if they didn’t have a bet it’s clear Sodashi’s fans – and those who had never seen her before – were awestruck by her run and colour.

One joked: “You need shades to watch this amazing horse.”

Another commented: “Gorgeous white – to get a white horse bred and win Grade 1s is insane.”

While another post read: “What a great horse in one word AMAZING!!”

Advertisement. Scroll to continue reading.
In this article:nicknamed, onsunday, won