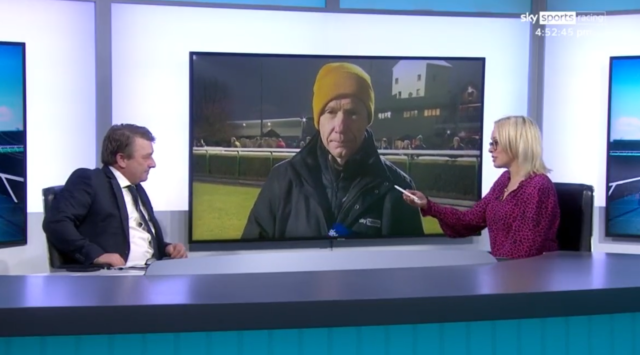 THIS is the intense moment two Sky Sports Racing presenters squared off in a clash over a controversial new rule.

The two were debating a new rule on minimum weights for jockeys.

Tom Marquand has already warned the new weight limits, coupled with the removal of saunas from racecourse, could lead to ‘flipping’.

That’s a term used in racing for purposely making yourself vomit to lose weight.

It was during Fitzgerald’s opening speech on getting rid of saunas being the ‘best thing’ that Sanders could be heard muttering ‘no’.

Asked by Alex Hammond why he disagreed, Sanders explained: “Mick, I understand what you’re saying and we’ve got a different generation.

“But do you not think… these are grown adults and they should be allowed to control their weight how they see fit?”

To which Fitzgerald replied: “Well can I ask you the question, Seb?

“If somebody had said to a younger you, ‘right, Seb, we’re going to put you on a programme that is going to give you a healthier, longer-lasting way of maintaining your weight’, would you have taken it?”

Sanders hit back: “Well, I mean… you go on about generations or whatever, I actually – “

It is then Fitzgerald cuts in with: “Seb, answer the question! Would you have taken it?”

“It didn’t matter what diet I was on, I would have had the same problems.

“What I am worried about now, and has to be taken seriously, is I think there’s a generation of jockeys who are saing they’re on these nutiritional diets and I am very worried about them.

“I think they’re up to ten times worse than anybody who’s getting into a sauna.”

Fitzgerald responded by saying jump jockeys are a lot better now but that still some will resort to ‘desperate measures’ to cut weight.

Punters watching thought Fitzgerald came out better in the debate.

One said: “Definitely only one winner.”

Another commented: “Only one winner on this debate. Not even close. The voice of reason.”