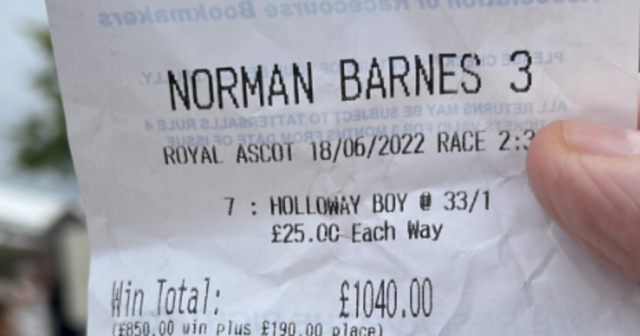 AN ARSENAL fan forgot to back his own 40-1 Royal Ascot-winning horse – while others won thousands on the shock hero.

One punter was £1,000 better off after backing the back outsider to win in his first ever race

Winning jockey Danny Tudhope wore the Arsenal colours in the saddle of the two-year-old – who could now be sold for mega money after interest from big spenders in Hong Kong.

Punters on course and at home made their own small fortunes backing the longshot.

But incredibly Nick – a self-described ‘big betting man’ – didn’t have a single penny on.

He said on ITV: “I’m just in shock. I’m absolutely in shock.

“I’ve been coming here 45 years… to think I could have a horse here and a win – I’m not even in top hat and tails!

“We only knew he was going to run on Thursday.”

Asked if Nick and his son and daughter backed the horse at monster odds, Nick’s children said they did but the owner himself confessed: “No. Everybody else did. I didn’t have a tenner on it.”

There was consolation of the winning cheque for connections though, which resulted in a £59,200 pay day.

And Nick, who owns a garden centre near Southend, told the Racing Post: “We were hoping to beat three or four home – that was the big hope.

“It’s still a blur and the crowd I was with – family and friends – were shouting their heads off.

“I started screaming when I thought he’d get second and then he flew home.

“I’m a big betting man and had a bet in almost every single race at Royal Ascot.

“I went to Ascot loaded to have lots of bets and backed Stratum, the last winner, but didn’t have a penny on our horse.

“There was no encouragement from the yard. Like I said, we’d have been happy to beat a few home.

“I know lots of people and my message to everyone was, ‘the boy’s running on Saturday – don’t go mad because it’s first time out in a tough race’.

“But people were having £100 on just because they know me and wanted to follow the horse.”

One punter posted a winning slip showing them in profit to the tune of more than a grand after sticking £25 each way on at 33-1.