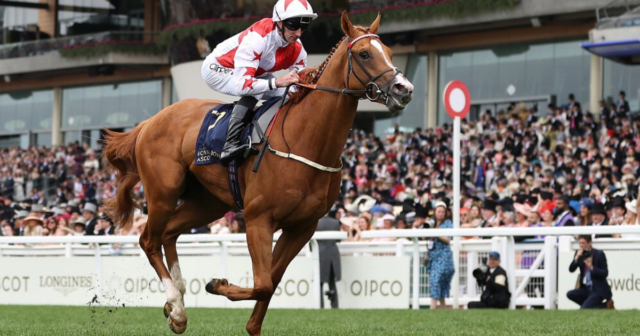 A HUGE Arsenal fan is sitting on a £1million fortune – thanks to his Royal Ascot wonderhorse.

Nick White, who owns a garden centre in Southend, gave the interview of the week when Holloway Boy stormed home in the Chesham.

Holloway Boy could net his owner a fortune – but will he sell?

The rogue 40-1 outsider, who White bought ‘for a bit of fun’, won £59,200 for connections in the Class 1 contest over seven furlongs last Saturday.

It could have been much more for self-titled ‘big gambler’ White – but he forgot to back the runner!

Luckily, other members of his family – not to mention general members of the public – won thousands on the Karl Burke-trained superstar.

But those sums could pale into insignificance compared to what White could make from selling Holloway Boy after his debut.

A North Londoner through and through – hence the name of the horse – White said he has already fielded calls from as far away as Hong Kong from owners wanting to buy.

The story could end up being similar to that of Hoo Ya Mal.

Key to his sale value is the fact he is not gelded.

That opens the door to the money-spinning world of stallions and thoroughbred breeding.

Also a colt and a year younger, Holloway Boy was initially bought for £60,000.

And though a win in the Chesham doesn’t quite have the same prestige as runner-up in the Derby, it’s clear huge things are expected of Holloway Boy.

ITV Racing expert Kevin Blake reckons the horse could be worth in excess of £1m.

He said on the Betfair Weighed-In podcast: “He’s a really nice individual. To win the Chesham first time out, he could be very nice.

“I’d say he might be in the million pound plus [bracket] – you wouldn’t believe the money that’s changing hands.

“It could be Hong Kong that really comes knocking for him, the money that gets paid for these horses is very wild.

“If you win the Chesham first time out that’s a very marketable thing.

“A million could be conservative if you get two buyers who really like him.”

So, will White sell up?

A day after the win he told the Racing Post: “I’d be very reluctant to sell. I’m in it for the fun.”

Did you miss our previous article…
https://www.sportingexcitement.com/horse-racing/what-have-i-just-witnessed-jockey-banned-after-unbelievable-ride-on-50-1-winner-who-was-given-uncontested-lead/