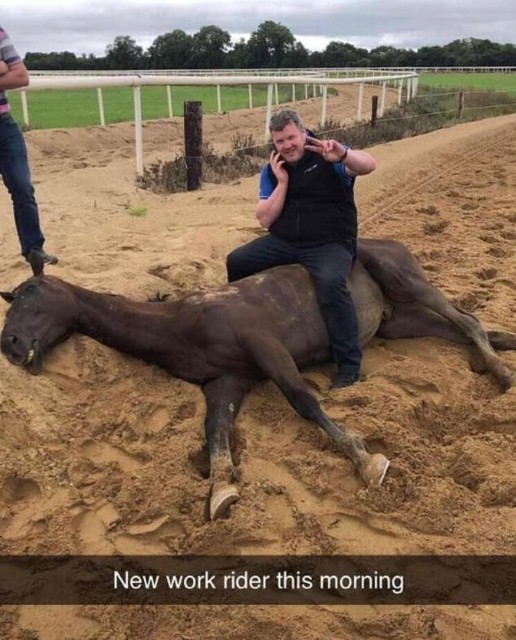 A week on Thursday Ireland’s banned trainer Gordon Elliott is back. And you can expect fireworks on his return.

Some, of course, will be disgusted that Elliott can ever train again.

Elliott was banned after this picture emerged of the trainer

In case you have been on planet Mars, Elliott was handed a year-long ban by the Irish Horse Racing Regulatory Board, the final six months of which were suspended, after an investigation into a photo of him sitting on a dead horse.

That ban was implemented in March, and the handler can make entries from September 9.

Others, though, will accept people make mistakes and be willing to give someone another chance, particularly if they have shown remorse.

Elliott, a three-time Grand National-winning trainer, who missed last March’s Cheltenham Festival as a result of his suspension, has himself branded his actions an ‘indefensible moment of madness’.

At the time, he added: “I’m absolutely heartbroken. What other way could I be?

“It is gut-wrenching to see the impact all of this is having on my staff.

“They have been the ones who have brought such success to the yard.

“They are gutted, each and every one of them. To see them suffering because of something I have done is hard to stomach.”

You will have to make your own mind up on Elliott’s second coming, and while I’m in the camp of forgiveness – as a person who is far from perfect and been given many chances along the way – I appreciate many of you will just say: “Well you would, wouldn’t you.” That’s the world we live in.

It’s worth remembering – while in no way making the offence acceptable – that the leaking of the photo, which was originally taken in 2019, was said to be part of a ‘sinister and concerted attack’ on the trainer.

That apart, I have no doubt Elliott will fire back salvos left, right and centre and will be hugely surprised if his Cullentra stables is not one to follow from the moment the shackles are released.

Of course it will be a yard without the stars of Cheveley Park Stud, for whom Elliott did so well with the likes of Envoi Allen.

But Gigginstown Stud has stayed loyal and boss Michael O’Leary will be keen to see his man back better than ever.

While Henry de Bromhead had incredible 2020-21 campaign, Irish racing needs Elliott as a rival to the unstoppable champion Willie Mullins.

The latter has proved in a league of his own for many season now, but it’s easy to argue Elliott has pushed Mullins to even greater heights.

The big race today on ITV – where I’m lucky enough to be wanted at Goodwood – is the Celebration Mile.

This Group 2 has been won by some decent animals in the past, including Lightning Spear, Breeders’ Cup Classic hero Raven’s Pass and Medicean.

It also gave a young Frankie Dettori a huge success on Mark of Esteem in 1996.

This time around the top-rated horse is globe-trotter Benbatl, who has been a star for Saeed bin Suroor, a trainer heading towards two hundred Group and Grade 1 successes.

Benbatl is a Group 1 winner in Meydan, Germany and Australia, where he took the Ladbrokes Stakes at Caulfield before chasing home Winx in the Cox Plate.

At the age of seven, Benbatl returns after a 337-day absence and has to give weight away to some of his rivals. He can win for the excellent handler of York victor Real World, but I’ll take him on with the younger Chindit.

The latter, trained by Richard Hannon, was a classy juvenile, impressing in the Group 2 Champagne Stakes at Doncaster.

This season, Chindit was back in good shape at Newbury, landing the Greenham before being defeated in the 2000 Guineas, St James’s Palace Stakes and Jacques le Marois.

Pat Dobbs’s mount was not beaten far in either of his last two starts and I suspect is much better than he has shown. Fingers crossed.

Across the globe, all eyes this evening will be on Saratoga, where Essential Quality is back in the Grade 1 Runhappy Travers Stakes  over a mile and a quarter on dirt.

The Brad Cox inmate is arguably the best horse in the world, having won seven of his eight starts including the Breeders’ Cup Juvenile and Belmont Stakes. He was also fourth behind Medina Spirit in the 2021 Kentucky Derby.