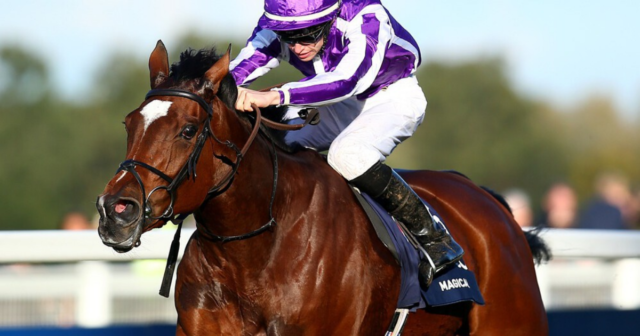 THE Champion Stakes at Ascot on Saturday promises to be an absolute cracker.

With more than £700,000 going to the winner, the world’s best horses will battle it out over 1m2f of the Berkshire track.

Magical was a previous winner of the Ascot Champion Stakes

Ten runners take their place in the star-studded line-up.

Here, Sun Racing tipster Templegate goes through each one in detail and reveals his pick at the bottom.

ADD up. Beat Mishriff when winning this in style 12 months ago on testing ground and backed that up with Group 1 success in Australia. Has had just one run this season when second in the Eclipse in July and his best form would give him a chance again. Looks a fair price to finish on the podium.

DON’T be Aasy. Has landed three Group 3s over further but has come up short tackling this grade. Was hot favourite for the Legacy Cup at Newbury last time but couldn’t land a blow. He cruised along but didn’t want to battle and needs the shorter trip to work wonders.

EUCH need luck. Game veteran who ran his usual good race in an Ayr Listed when running on into second over this trip. Likes soft and has run well at Ascot before but looks way short of this level.

RIFF in tune. Suffered a rare blip in this 12 months ago when the Gosden horses were unusually struggling for form. Had already won the French Derby and landed the Saudi Cup before the Dubai Sheema Classic at Meydan. Ran well behind Adayar in the King George before landing the Juddmonte International hard held at York last time. He’d like the ground a bit quicker but this trip is ideal and he looks hard to stop.

YAR a star. Brilliant Derby and King George winner over 1m4f and ran well enough in the Arc 13 days ago when pulling hard early on. That meant he ran out of puff in the final furlong to finish fourth. Dropping back in trip doesn’t look an obvious move but his class will see him go close and any ground suits.

SHOI short. Followed his Derby seventh with a Grade 1 win over this trip in America before two more modest efforts in the States. Saves best for this trip and is bred to like give in the ground. Not facing firm ground will help but he needs to raise his game.

HELLO Dubai. Is getting better with every run and moved out of handicap company to land back-to-back Group 2 wins in France. This trip is ideal and he likes some cut in the ground. He has more to offer and could upset the big names for William Haggas.

FAIRY Tales. Group 3 winner who was held in that grade last time. Won the Golden Gates Handicap over this trip at the Royal meeting on soft so should like conditions. Taking a big hike in class.

MAC attack. Won the Irish 2,000 Guineas but has not come close to matching that form since being upped in trip. Respected coming from the great Jim Bolger but was well beaten in the Juddmonte International.

WAY to go. Ran on well with fifth in the Arc last time on first run since his excellent second in the French Derby. Soft suits but the way he came home at Longchamp suggests he wants a longer trip.

He has gone from strength to strength this season with big wins in Saudi, Dubai and in the Juddmonte International at York last time.

This trip is ideal and we can forgive his poor run in this 12 months ago because the Gosden horses were suffering a rare loss of form at the time.

Adayar is a superstar having won the Derby and King George. He should settle better than his fourth in the Arc two weeks ago but this shorter trip is a worry.

Dubai Honour looks a Group 1 horse in the making and is respected. He can scrap it out for third with last year’s winner Addeyyb.