Baaeed is not like Frankel but I feel sorry for anyone trying to take him on, says Jim Crowley
Advertisement 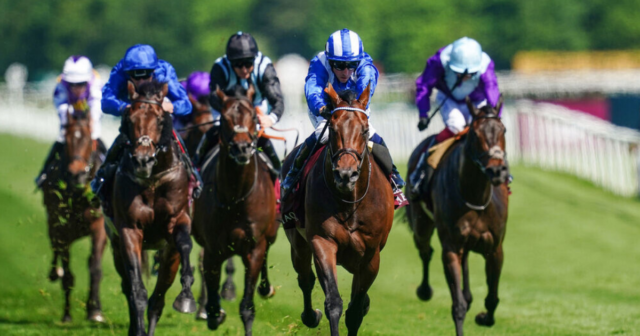 JIM CROWLEY has quashed comparisons between Baaeed and Frankel – but said he feels sorry for anyone trying to take him on.

Coral ambassador Crowley, who runs through his Saturday rides below, said: “Almost a week on from Baaeed’s Lockinge win I can still look back at it with so much satisfaction, and it still brings a smile to my face!

“I did expect him to win, and his home work going into the race had been great, but it was his first run of the season and there’s always that slight doubt until they go and do it on the track, and this fellow did it in style.

“He was a little bit free going to post but once the race was underway it couldn’t have gone any better, he travelled beautifully and his sectionals for the final three furlongs were very strong.

“He does have so much pace, but equally I would look forward to him stepping up in trip later in the season, probably at York.

“He’s not like Frankel for example, who was a much more exuberant type, this horse has such a professional attitude, just like his dad [Sea The Stars], and he’s versatile when it comes to the ground.

“But first we have to get Ascot out of the way, I’m not sure who will want to take him on the Queen Anne, but that’s not my problem!”

Crowley on his Saturday rides…

This weekend I’m nice and local, with a couple of days at Goodwood.  Saturday begins on board Ivory Madonna, an unraced Dark Angel filly, out of a good filly, Clem Fandango.  On breeding she should be OK on this going, but as always with these debutants, we’ll find out plenty with this first run.

Annaf was actually bred by Shadwell, but she was unraced for us.  He’s won a couple of times on the Newcastle all-weather, and will hopefully improve for his run on turf at Newmarket last time.  If he does, he could have an each-way chance in an open-looking handicap.

I rode Majestic Dawn to finish third in a Group 3 at Haydock last summer, and at 111, he’s top rated here.  He is a front runner, but he ran too free at Chester last time and as a result didn’t see out the race properly.  The ground will suit, and if I can get him to settle early on, he could be hard to pass.

I ride for five different trainers here today, and this fourth ride is in the Godolphin blue for Saeed bin Suroor.  Global Heat is without a win for a while, but he ran OK in Meydan over the winter, and followed that up with a third place at Wolverhampton last month.

He’s rated 101, which tells you he’s a decent horse at his best, but he’s got plenty to find, as they all have here, with Lone Eagle, who should be hard to beat.  Global Heat will need to take a big step forward from his recent form to trouble the favourite, but on the plus side he will lack nothing fitness-wise.

My last ride of the day is Percy’s Pride for William Knight, who gave me a double at Newcastle recently.  She stays well, and has run well enough here in the past, which helps given how unique a course Goodwood is.  She also comes here having had a pipe-opener at Doncaster last month, and if that brings her forward, she could have each-way chances in a race where only nine pounds separates the ten runners.