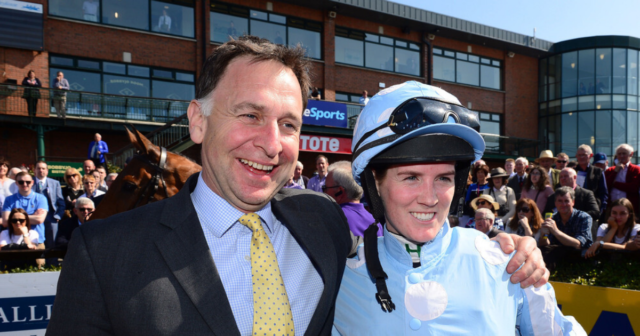 HENRY DE BROMHEAD has pulled off a cunning plan to get Rachael Blackmore on his two superstars.

Now he aims to get another one over Gordon Elliott at Down Royal this afternoon.

De Bromhead revealed earlier this week Jack Kennedy would ride Minella Indo and Davy Russell would be on Envoi Allen in the two big races in Ireland.

De Bromhead knew the news would not go down well with Elliott and he was right.

Elliott exploded: “They are my jockeys and they either ride for me or not at all!”

After the icy blast from their guv’nor, sheepish Kennedy and Russell were forced to toe the line and jumped off the De Bromhead-trained horses.

Co Waterford-based De Bromhead said nothing on the jockey row but, privately, he has ‘been more than happy’ to have his No1, Cheltenham Festival queen and Grand National-winning girl Blackmore on the two big guns.

Kennedy and Russell will be gutted and, potentially, the move by Elliott to pull rank, is likely to end up hitting the riders hard in the pocket if they don’t get back on board the horses again.

Kennedy was brilliant on Minella Indo when the pair fought off Blackmore — who had chosen to ride stablemate A Plus Tard — in last season’s Cheltenham Gold Cup.

Owner Barry Maloney didn’t take kindly to the fact Blackmore had picked A Plus Tard over his horse after riding Minella Indo in his previous ten races prior to the big one.

However she is now back on the horse and the super-sub said: “The feature looks a brilliant race with the top Irish staying chasers and Frodon coming over. I’m really looking forward to it and Minella Indo.

“He can take a fair bit of work to get going but he’s been going well at home.

“Envoi Allen was pulled-up when I rode him at Punchestown but he chipped a hind joint and needed an operation before a summer off.

“But he’s won impressively twice at this meeting so fingers-crossed we can see him back to his best.”

Elliott sends Coko Beach and Vado Forte against Envoi Allen – the horse he admits still keeps him up at night after owners Cheveley Park took him away following the leak of the infamous dead horse photo.

It’s hard not to think that decision hasn’t caused Elliott’s outburst as he closes rank in his comeback season and you bet he’d love to get one over his old shining light.

But De Bromhead won’t be losing any shut eye over the situation and is hopeful his Gold Cup champ is ready to rock and roll at Down Royal.

He said: “Minella Indo’s in great form and we’re looking forward to getting him started, he’s had a good summer.

“We’re toying with the idea of the King George this winter but let’s get this out of the way first.

“Envoi Allen seems in good form and is moving really well. All is good. The races are so competitive no matter where you go.”

In this article:Cheltenham, Cheltenham Festival, Down Royal, Punchestown