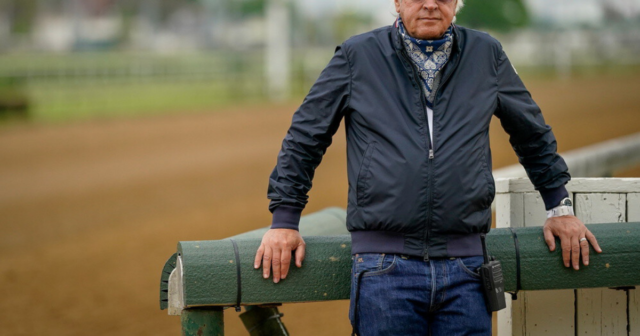 THERE is plenty wrong with racing in the UK, be it dreadful prize-money, bullying scandals or incompetent leadership.

But the good news is, if we are ever feeling down about the state of this great game of ours, we can console ourselves with a glance across the pond.

Yes, our issues are small fry compared to those that have plagued American racing for years.

I’m well aware that it’s pretty niche to be a US racing fan, and the only time you’ll read about it in the British press is when us journos head off on the gravy train to the Breeders’ Cup.

But there have been some pretty incredible stories tumbling out of the States of late, some that I have to share.

First a bit of background – I’ll try and keep this short and sweet.

Bob Baffert is one of the most famous and recognisable trainers in the world. He has won nearly £250 million in prize-money and was inducted into their Hall of Fame in 2009.

But far from helping build the sport’s reputation, Bob has gone at it with a wrecking ball in recent years.

He has had multiple runners – including Grade 1 winners – fail drug tests. They include Medina Spirit, who tested positive for steroids after winning the Kentucky Derby last May.

He was banned from having runners in Kentucky and New York, but because each state has its own rules he was allowed to continue racing his horses in California, where his yards are based.

To put that into context, it’s like John Gosden having numerous doping breaches, his runners being banned at Epsom and Newmarket but allowed to compete elsewhere. It’s insane.

Since 2000, Baffert’s horses have died at the highest rate of any trainer in the country. Medina Spirit added to those sorry statistics when suffering a suspected heart attack last month.

The reason Baffert is in the news again is because he has a disciplinary hearing coming up on January 24, and earlier this week fresh charges were filed against him.

They include two further doping cases, and the discovery of an unlocked cabinet at his premises with 25 unlabelled, mysterious medications inside. It doesn’t look good for Bob.

In a bizarre twist to the sad Medina Spirit story, Jeff Blea, the top vet in Californian racing, had his licence suspended on Monday.

He was due to conduct the investigation into Medina Spirit’s death – but it’s since emerged that he has been accused of drug breaches of his own.

This comes just days after disgraced trainer Jorge Navarro was sentenced to FIVE years in jail after an FBI investigation uncovered a huge doping scheme.

Another vet, Kristian Rhein, was jailed for three years this week for his part in another doping scandal involving former trainer Jason Servis.

Like some sort of 19th century freak show, it’s not very pleasant viewing but I can’t take my eyes off it.

There is meant to be some light at the end of the tunnel in the US, with a new anti-doping agency set to be launched in July.

But last month, infighting and disagreements at the top of these newly-formed regulators meant negotiations on how best to tackle the sports problems ground to a halt.

It’s no exaggeration to state that the future of racing in America is under threat – the stakes have never been higher.

They say everything is bigger and better in the US – that goes for their scandals, too.

LET’S face it, January is normally the most boring month in the racing calendar.

But fear not, there is actually some exciting stuff to look forward to this time around.

That’s thanks in large part to the inaugural Winter Million at Lingfield, a new three-day meeting with – you guessed it – a million quid up for grabs.

The fixture kicks off on Friday 21 January with a £345,000 card, including a new two-mile handicap hurdle.

There is a valuable all-weather Flat card the following day, featuring the first ever Winter Oaks.

And it’s rounded off on Sunday with the ‘Winter Million Steeple Chase’ over 2m6f and worth a tasty £150,000.

Waiting Patiently was the first high-profile horse confirmed as an intended runner in that race this week, and plenty more will follow in the coming days.

With the Racing League also set to return in a new and improved format this summer, you have to tip your cap to some of the innovators who are trying their best to freshen up the stale periods of the calendar.

The Winter Million is a cracking innovation and it will help get us through this dreadful month before Festival Trials Day on January 29. Bring it on.

Did you miss our previous article…
https://www.sportingexcitement.com/horse-racing/trainer-ryan-potter-says-tolworth-hurdle-conditions-are-perfect-for-jetoile-to-cause-an-fa-cup-style-giant-killing