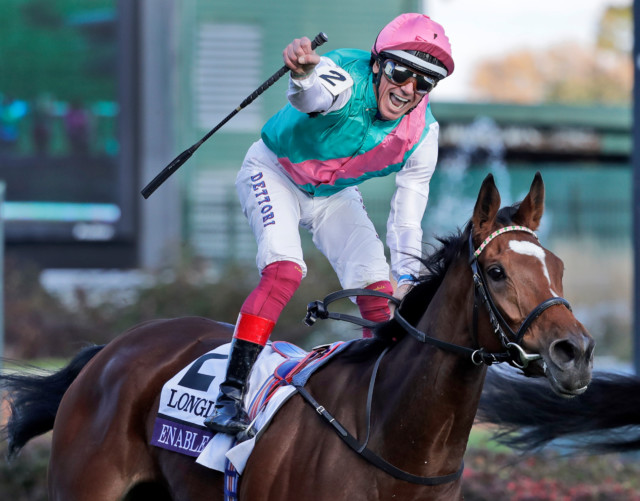 THE eyes of the racing world will be on America this weekend as the two-day Breeders’ Cup kicks off.

Horses from around the globe will compete for the multi-million prize fund up for grabs at Keeneland.

Frankie Dettori and Enable were famous winners two years back

What TV channel is the Breeders’ Cup on?

The Breeders’ Cup is live both nights on Sky Sports Racing, Sky Channel 415.

It gets underway at 8.15pm on Friday and from 5pm on Saturday evening.

What time is the Breeders’ Cup?

Saturday’s action kicks off at 5.02pm with the Breeders’ Cup Filly & Mare sprint and runs through to the lucky last at 10.18pm.

Racecards for the Breeders’ Cup

Who are the favourites?

The big races come on Saturday night with a whopping nine Grade 1s.

Monomoy Girl (8.54) will be one of the supposed bankers of the night in the Distaff.

Where is the Breeders’ Cup being held?

The Breeders’ Cup moves around the American circuit on a yearly basis.

In 2020 it will be run at Keeneland Racecourse in Lexington, Kentucky.

Gamine looked a monster on her first outings this season and should be hard to beat back at seven furlongs in the opening Breeders’ Cup Filly & Mare Sprint (5.02).

Advertisement. Scroll to continue reading.
In this article:Frankie Dettori