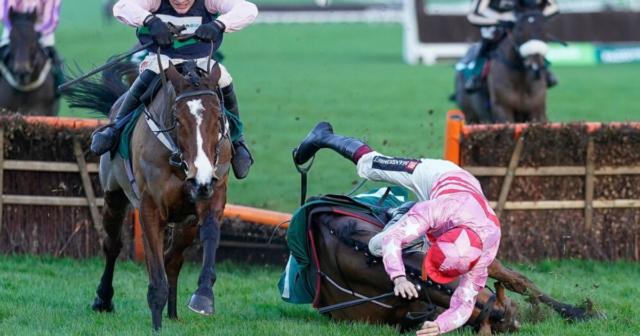 OLLY MURPHY reckons Brewin’upastorm can get his revenge in the spring after a desperate final flight fall at Cheltenham.

His star came down when challenging winner Stormy Ireland in the Relkeel Hurdle to leave his young gun trainer gutted.

But the horse and jockey Aidan Coleman both came out unscathed and 30-year-old Murphy is already eyeing up some big spring-time targets.

He said: “The horse seems fine, he’s trotted up and down. He’s a bit stiff and sore as you’d expect but thankfully it seems nothing major.

“We were gutted at Cheltenham, more so than we probably let on. Losing like that on those big days is hard to take when you are so close.

“He’s always been a horse that goes well fresh so he’ll have a break and then we’ll probably aim him at the National Spirit at Fontwell, a race he won last year.

“After that we can go to Aintree. People say he’s fallen twice at Cheltenham now, I don’t think it’s the track, more so just a coincidence.

“There’s no race for him at the Festival as he just doesn’t get three miles up that hill properly.”

Murphy’s strength lies in his novice hurdle division this year but he’ll be unrepresented in Saturday’s Grade 1 Tolworth at Sandown after exciting Bombs Away was retired.

Murphy said: “I’m just going through my team with the vet to do their jabs so it’ll be a quiet few weeks for us.

“Sadly Bombs Away suffered a career-ending injury at Aintree last time out. It’s sad for everyone involved as he was a hugely exciting prospect and one we had high hopes for.”

In this article:Aintree, Cheltenham, Fontwell