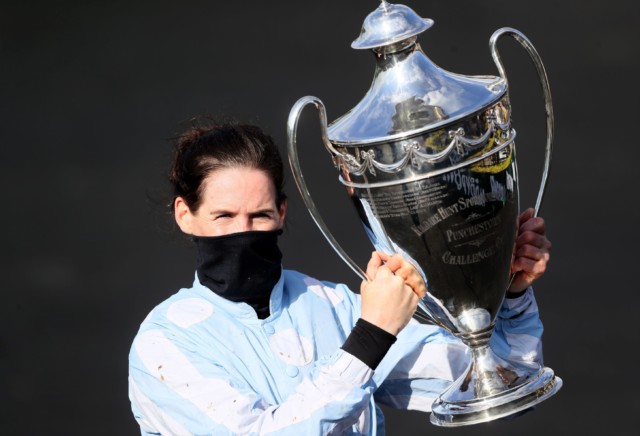 IF there was ever a horse to end Henry De Bromhead’s barren week at Punchestown it was superstar Honeysuckle.

His wonder mare made it a perfect 12 wins with a commanding display in the Paddy Power Champion Hurdle.

It was a fourth Grade 1 of the season for the seven-year-old – all with Rachael Blackmore on board.

And after a frustrating Festival so far, you could see the relief on Blackmore’s face as she crossed the line from the gutsy Sharjah in second.

Goshen and Jason The Militant knocked seven bells out of each other from the off and it was left to those on behind to make their move.

Blackmore and Honeysuckle took it up on the turn home, probably sooner than they would have liked.

Sharjah and Patrick Mullins smelt an opportunity as they approached the last, but this is Honeysuckle and she had more when it mattered.

Blackmore past the post two-and-a-quarter lengths in front of Sharjah with Epatante a good way back in third.

The jockey said: “I’m very relieved! She’s some woman to get me out of trouble.

“I committed her far too soon and we didn’t have a lot of petrol left at the last. I doubt the pictures are too pretty.

“But she dug deep for me and pulled it out of the bag like she always does.”

Blackmore and Honeysuckle routed them at Cheltenham and the jockey admits that race may have got to her.

The bookies were still impressed and shortened her further into 7-4 for next year’s Champion Hurdle.

Blackmore added: “Even going down to the start she didn’t grab the bit as much as she normally does.

“Maybe she was just feeling a bit today I think, but the very good ones can still deliver on the day.

“She jumped the third last and the second last well. It wasn’t smooth everywhere but she’s done it. 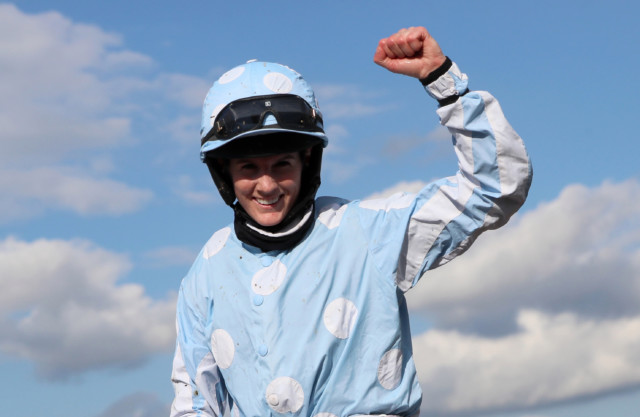 It was Blackmore’s first win of the week at Punchestown

“Beforehand I was just trying to tell myself she wins everyday and why would it be any different this time?

“Henry always has her right and I was trying to be as confident as I could. Thankfully it worked out.”

De Bromhead said: “We weren’t having an amazing week, but she always gets us out of trouble. She’s amazing, but I was getting a bit nervous alright!

“She’s like a lot of those really good horses, she has such a will to win and Rachael is so good on her.

“She’s done that before at the last, but thankfully Rachael had it all under control. It’s been an amazing season and that’s a great way to finish it off.”

Advertisement. Scroll to continue reading.
In this article:Cheltenham, Punchestown