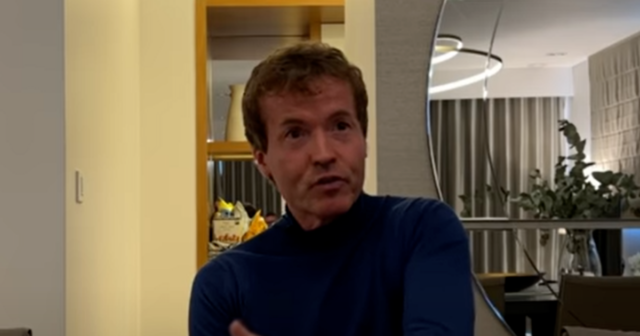 BRITAIN’S most feared punter has broken years of silence to explain how his life changed after he ditched Ferraris and helicopters and went into hiding.

Say the name Patrick Veitch at a racecourse today and it will send shivers down the spines of bookies.

Veitch broke years of silence to reveal the impact of a criminal trying to extort £70,000 from him had on his life

Veitch, a Cambridge-educated maths whizz, has made more than £10million bashing the bookies over a fabled career.

Widely regarded as one of the greatest racing bettors in the business and dubbed ‘Enemy No 1’, he became the epitome of the playboy punter with the flash lifestyle.

But a run-in with a criminal who tried to extort him for £70,000 and was later sent to prison for almost killing a policeman changed his life.

Veitch was threatened with having his legs cut off if he didn’t pay up.

He went to the police, told them everything and went into hiding, putting on hold the life that gave him God-like status in punting circles.

In a series of new interviews with Star Sports, Veitch talks about having to change everything – and, reflecting on it some years later, how it impacted his life.

Suddenly, even losing £20,000 on a bet, a stake ordinary for him, didn’t quite have the same meaning.

He told Star Sports: “It was an enforced change. For many years I needed to make sure I wasn’t photographed.

“For a long time I was told that the best place to hide out was in London.

“But even then I needed to make sure that if I saw someone, I knew I had my explanations ready, like ‘Oh, I have just popped into London for the day’.

“Even knowing I was in a place with seven million people was more information that I wanted to give out.

“That changed my life.

“I’m not as shadowy these days but it certainly made a change to my outlook on life.”

As part of the series Veitch, who is perhaps best known for his punt on 100-1 Exponential who eventually won at 8-1, also revealed some of the tricks of the trade.

He said that some methods work one week but don’t the next, so punting is a fluid test.

One area he said to focus on was to ‘play when the market’s wrong’.

By that he basically meant if you think a horse has a chance but it’s not being tipped up, then as long as you have strength in your convictions, you could have found the value.

Mind you, finding value and backing a winner are two different things.

He also said to watch races carefully to double and triple check your hunch – for example, a horse liking a longer trip – stacks up, and whether it matches with the conditions for that particular race.

Of course, loads of things go into finding a winner.

And for Veitch it was an all-consuming job.

It was one that made him millions but also, for a brief time, turned him into a recluse fearing for his life.

Did you miss our previous article…
https://www.sportingexcitement.com/horse-racing/top-trainer-aidan-obrien-reckons-it-will-be-a-big-ask-for-luxembourg-to-win-the-2000-guineas/