Britain’s oldest jockey lands £50,000 winner after thrashing rivals half his age… and says he won’t retire yet
Advertisement 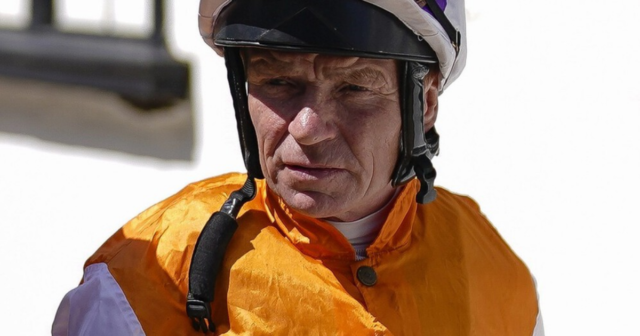 BRITAIN’S oldest professional jockey landed a £50,000 winner after thrashing rivals half his age.

Jimmy Quinn, 55, was unstoppable on 16-1 shot Lethal Levi in the bet365 handicap over six furlongs at Newmarket on Thursday.

Quinn, who rode his first winner in 1985, was not for catching in the seemingly competitive heat.

He had the likes of champion jockey elect William Buick, 33, and globe-trotting superstar Hollie Doyle, 25, in behind.

But this was a real case of age before beauty as Quinn showed them all how it’s done with a clean set of hooves.

And even though he is now in his 38th year as a pro rider, Quinn, who was victorious on trainer Karl Burke’s horse, said he has no plans to hang up his whip.

He said: “This is my 38th season with a licence. It was 1985 that I had my first winner and I can see it in a photograph at home.

“You don’t get these winners when you get to my age.

“Somebody said to me when are you going to retire and I said Saturday, I don’t know which Saturday but I can promise you it won’t be this Saturday!

“I was a little bit worried I had stall 14 but I made myself go to the middle of the track.

“He popped the lids not very good as he was rocking in there, so he didn’t hit them on an even keel.

“It took me about a furlong to get my foot in the iron properly.

“From half-way I’m thinking I’ve got a lot of horse here. I gave him a squeeze past the three and he has just ran on all the way to the line.

“I’ve never ridden him before and I will probably never ride him again but he has done everything right for me.

In this article:firstwinner, onthursday, wasnot