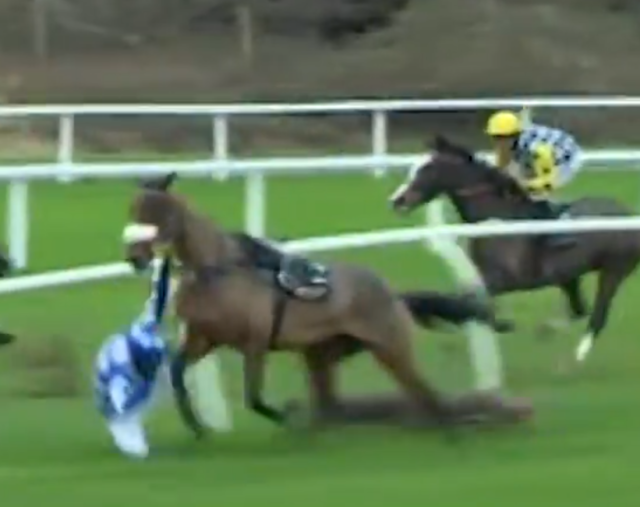 JOCKEY David Bass thankfully walked away OK from this horror Newbury fall – which included a stamp from his horse.

Bass was riding the Kim Bailey-trained Does He Know in Tuesday’s feature Challow Novices’ Hurdle over 2m 4½f.

The 6-1 shot looked to be travelling beautifully until until disaster struck on the fifth flight in the Class 1 contest.

Does He Know darted off the track to the left and burst through the running rail.

Bass had no chance of holding on and was dumped to the turf.

But falling in front of the horse meant the five-year-old trampled over him as he ran on.

Television cameras captured the dramatic fall – and the moment Bass took a kicking from his mount.

Does He Know’s run out came out of the blue after he entered the race in a rich vein of form.

He had won his last three races, including a Grade 2 contest at Cheltenham last month and looked set for big things.

Fortunately the horse was not hurt in the incident and Bass was shown back on his feet soon after his fall.

David Bass is OK after Does He Know ran out in the Challow at @NewburyRacing pic.twitter.com/GvaAm9umtQ

Bravemansgame ran out an impressive 5-2 winner under jockey Harry Cobden and trainer Paul Nicholls – who was quick to compare the horse to superstar Denman.

Incredibly, Bass was fit and well enough to ride again in the very next race.

He hopped aboard Shanacoole Prince but unfortunately the 6-1 chance was pulled up before the jump fourth from home.

Did you miss our previous article…
https://www.sportingexcitement.com/horse-racing/grand-national-legend-bob-champion-and-ex-bha-boss-nick-rust-amongst-racing-names-on-new-year-honours-list