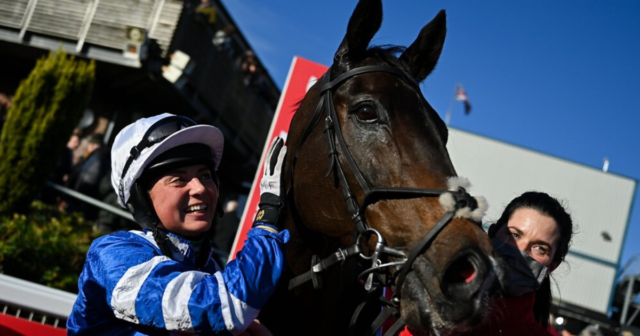 SUITCASES packed, toothbrushes at the ready and pyjamas folded… and that’s just Frodon and Greaneteen!

We’re off across the Irish Sea for a big date at Leopardstown, and I can’t tell you how much I’m looking forward to it.

The chance to ride two great horses on the same weekend against some of the best in Ireland is just awesome, and something I’ll never take for granted.

I flew out from Heathrow on Thursday, and those two came across on the ferry, which allowed them a day or so to relax beforehand.

Frode knows all about travelling by sea after coming over for the Champion Chase at Down Royal in October, so I’m sure he’ll have told Grean what to expect.

It’s always a relief when you have a smooth sea and the journey goes well, because you want them as settled as possible.

But they’re both good old professionals, and know what it’s all about.

I keep saying it, but horses have their own personalities and the lorry they go in will determine which way they face.

Some have their favourite way of travelling and are much more at facing forward, sideways or backwards.

Shelley (Cramer) and Kevin (Parker) will be up front in the lorry, but there are cameras to keep an eye on the two horses whilst they are on the move.

There are fans to keep a constant monitor on their temperature – that’s Frodon and Greaneteen – and they really go in the lap of luxury. Rightly so!

Harry Derham is coming across to saddle them both, so we have our team in place.

When Frode was in Ireland last time, he had the whole of the two-boxer to himself and stood forward the whole journey, having the odd walk around every now and again.

I’ll meet up with them for a bit of a leg stretch in the morning, and hopefully then it will be all systems go in the races themselves.

First up is Frodon, in Saturday’s Paddy Power Irish Gold Cup, and if he could design his own racecourse, I’m sure it would be along the same lines as Leopardstown.

I just know he will be pumped for the challenge of the long straight and the jumping down the back means he’ll really be in attack mode.

I’m looking forward to seeing if he recognises the Irish obstacles, because they have bigger bellies than the English ones – that’s the front of the fence – and a larger surface space.

After all he’s done in his career, he certainly doesn’t have anything to prove to anyone, and it’s awesome every time I get to go out on track with him.

Nothing he does surprises me any more, because I know how tough he is. He will give you everything, every time.

I’ve said it before, but he’s just phenomenal, and I am lucky to have a horse like him in my career.

When Frode won at Down Royal, the reception he got from the Irish fans was just insane. He’s as popular over here as he is back home.

They just appreciate what he does, what he’s done and who he is. When Shelley was cooling him off after the race, the supporters kept on coming to see him.

Everyone wanted a picture or to rub his nose and it was so nice for his owner, Mr Vogt, as well.

We certainly didn’t feel like outsiders, put it that way!

As for Greaneteen, no-one can ever take away the fact that he is a Tingle Creek winner, and what a day that was.

On his last run he was second behind Shishkin, on soft ground – which we know he doesn’t like – and it was very tacky.

And we were conceding three pounds as well, so there were a few points against him. This time the race will be fast, the ground will be good and we have a uphill finish. I can’t wait to see how we fare.

He’s been in really good stead at home, and was testing my biceps when I schooled him earlier this week!

It would be fantastic if we had the same outcome as that day at Sandown last April, when both Frodon and Greaneteen won in the space of about half an hour.

Let’s see what we can do, but one thing’s for sure – the competition might be fierce and the races will be fast but we’ll be kicking hard!

In this article:Down Royal, Leopardstown