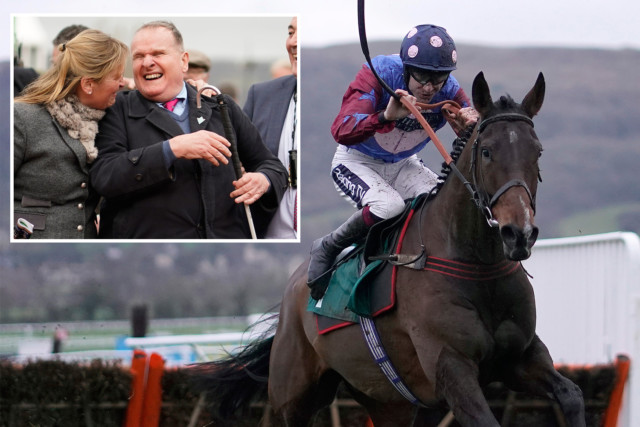 The Grade 1 at Ascot is shaping into a real Christmas treat with Newbury winner Thyme Hill the chief threat.

But after a solid return when second to that rival, Lavelle hopes they can now turn the tables.

After a lengthy layoff caused by an irregular heartbeat after the Cheltenham Festival, Lavelle’s star is reportedly now back to his best.

Lavelle said: “He’s really come out of his Newbury race well which was always the concern given the layoff before.

“It’s definitely brought him on and he seems full of confidence and I couldn’t be happier with him. I wish the race was tomorrow instead of having to wait until Saturday with him!”

Thyme Hill is the early market leader, and other rivals could include Gordon Elliott’s Sire Du Berlais and David Pipe’s Main Fact searching for an incredible tenth win in a row.

But Lavelle hopes Paisley Park can reclaim his status as number one stayer this weekend.

She added: “It’s never quite a one horse division like people used to say.

“There’s always something around the corner as we found out at the Festival.

“But look I’m hoping after Saturday it might be people saying it’s back to a division that we can dominate again!

“It’s such a cliche but this is what racing is about, it doesn’t matter if it’s a two mile hurdle or a three mile chase, you want these great horses to be running against each other to give everybody a thrill.

“Because we don’t have the options of going in many directions with these three mile stayers they are forced to run against one another and you want to get these proper Grade 1 races, and I think certainly at this stage at Ascot it looks like it’ll be as good a Grade 1 as you could have.”

Paisley Park won the 2018 Long Walk Hurdle on his way to Festival success but was a late non-runner in the race last year after lots of rain.

But despite a similar forecast this year, Lavelle is sure there won’t be a repeat this Saturday.

She said: “We’ve been very lucky with him that he’s very versatile in terms of what ground he runs on.

“We withdrew him last year as it was a very last minute decision even on Ascot’s behalf whether the card was going to be on. Down the back it was horrible and we didn’t want to take the chance with him.

“Unless it’s as bad as that again then I wouldn’t be saying to you again that that would be issue and we wouldn’t be running again.”