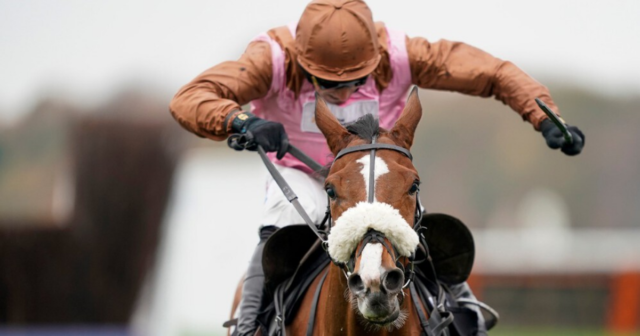 AMBITIOUS Dan Skelton is already eyeing up his next 1000 winners after bringing up the landmark at Ascot.

Faivoir’s victory on Friday continued Skelton’s flying start to the campaign and the 36-year-old sits pretty at the top of the trainers championship from Paul Nicholls.

And why Skelton is yet to say he’ll go all out to topple his old boss, he’s far from ruling it out.

“It’s a fair old number to get, and as everyone knows I like something to aim at. Paul always told me to keep kicking so that’s what I’m thinking now, we’d like the next thousand a bit quicker.

“We’re not done as a team yet, it feels like we’re just getting going and I can’t say how pleased I am with the people I’ve got behind me.

“Paul is closing on 4000 which shows you how far we’ve still got to go. I know I’m top at the moment but I don’t want to think about it just yet.

“It doesn’t matter how many nuts you have as a squirrel, there’s always a squirrel out there with more.

“I said Paul was a shoe-in the other day and he probably still is, but if we can stick it out till after Christmas and it stays tight, then who knows?”

Skelton’s brother and Champion Jockey Harry has steered the majority of the 1000 home and he smiled: “What a trainer he is, he’s such a leader and we’re only going to get better. I’m delighted for him.

“We’ve got some serious horses to enjoy back at home and I’m loving every minute and I know Dan is too.”

Nicholls could shoot clear with a big day at Haydock on Saturday where he saddles Next Destination in the Betfair Chase and crack novice Bravemansgame in a valuable Graduation Chase.

But we might have a serious battle on our hands with Nicky Henderson sure to have a say once he unleashes his star names like Shishkin and Epatante.