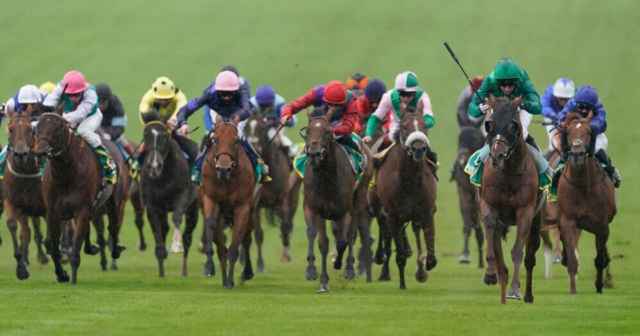 THE Cambridgeshire Handicap is one of the big betting races of the year.

And with a colossal 35 runners to choose from before the off, expect a frenzy from punters certain they’ve got the winner.

But, if like many of us, you’re finding it hard to choose, fear not.

Templegate runs through every runner here and gives his verdict on their chance before it gets underway at Newmarket at 3.40pm on Saturday.

LET’S have a Maat finish in the bet365 Cambridgeshire.

ANMAAT is a handicapper going places after his impressive success at Doncaster earlier this month. He has a 4lb penalty and a lot more to come for in-form Owen Burrows.

Astro King will love the breakneck pace and rates a big danger after his good third at York.

Chichester caught the eye with a commanding victory at Ayr last week and Hollie Doyle is a good booking for trainer Keith Dalgleish.

Bell Rock has plenty of weight but a lot of class too and looks pick of the big prices.

ROCK ON. Won over course and distance in May and solid run in a Group 3 latest. Drops into a handicap with lots of weight but Andrew Balding is in form and he’s got solid place claims.

MAGIC man. Frankie’s won two of the past three runnings and he steered him to a close second at York last time. Extra furlong will be fine and he’s right in the hunt.

DAWN raid. Won this last year from 10lb lower and not scored this season. Fair effort at Haydock latest and we know trip and track suit. Buick booking a plus.

RAISE up. Fair run in hot Galway handicap and likes a big field on any ground. Has won here and comes over from Ireland with a chance.

MARINE sunk. Not run since Meydan in March and last win came at Group 1 level as a two-year-old in 2018. Has talent but may need this after six months off.

BED time. Bits of form this season but held on the AW last time and probably better over shorter. Now 9lb above last UK win so needs best.

IN deep. Fair run after 12 months off at York last time. Trip and track suit and should be fitter for that comeback.

Second in Royal Hunt Cup and ran well at York latest. Will relish this big field and fast pace. Real battler who will be involved in the finish.

Improved to win at Ascot last time and Gosdens have good record in this race. 4lb penalty gives him every chance if he can find a bit more.

ROPEY bet. Fair form in small fields at low levels and won at Yarmouth latest. He’s up the weights for that in a much hotter contest.

DANCE move. Fair Irish form in soft ground and fit from a solid comeback. Has more to come but rain would be a big help.

OUT of Breath. Won at this meeting last year but had just one outing since when held at Sandown. Tough race to make debut for Michael Bell.

IRISH missed. Clocked fast time in winning over a mile at Redcar last time. Haggas horses are in form and he has more to offer but this is a big hike in class.

MON gone. Pulled too hard at York after modest Doncaster effort. Could improve after six starts but needs a lot more.

HAVE a Luc. Back to form with a fair fourth at York and stays well. Only 1lb above last win and second in this 12 months ago so can’t be ignored.

POWER cut. Few miles on clock for his age but has struggled last two in fair company and needs to improve.

FOX off. Up 6lb for Haydock win before poor show at Ascot behind Uncle Bryn. No obvious reason why he’d reverse that form.

ANY dream. Seventh in this last season from 2lb lower and comes here on the back of two wins. Should run well again,

GOOD grief. Tricky ride who won well at Donny before a York flop. Has ability but can’t be trusted to show it.

TRAIS away. Shown nothing since winning at Sandown in June and well beaten in easier race at Doncaster 14 days ago.

NET gain. Good third in Irish version of this last time over a mile. Should stay and likes a big field so one of the better outsiders.

WELCOME Maat. Improving with every run and quickened well to score at Doncaster last time. Stays well and looks well ahead of the handicapper. Likes to be up with the pace out of trouble and can progress again for Owen Burrows.

AM dram. Hasn’t followed up two decent wins here and needs this longer trip to help.

HIRED fired. Fair run behind Uncle Bryn at Ascot last time but all wins have been in much lesser races so needs more.

CHIC looks good. Impressive win in decent race at Ascot and still on very fair weight. Stays well and every chance if taking another step forward.

LONG strong. Didn’t beat much at Chelmsford last time but did it well and has few miles on the clock. Should have more to offer and has a chance.

COMM on. Won a small Newbury race in June but held at Epsom last time and looks short of this level.

THE End. Won a three-runner race at Carlisle last time but this is a much tougher challenge under a penalty.

Soz Zoz. Form has dipped in Ireland and poor last two at The Curragh. Has something to prove after that.

NO Data. Won on the July course in June but badly out of form since. Needs headgear to work wonders.

PLANT and decked. Struggling this season and well beaten in lesser race at Goodwood last time. Hard to fancy.

JEAN genie. Won here in May but not shown a lot since including when held at Chester latest. Yard in form but a tall order.

Did you miss our previous article…
https://www.sportingexcitement.com/horse-racing/sports-next-billionaire-perfect-horse-st-marks-basilica-could-join-messi-and-ronaldo-in-ultra-exclusive-club