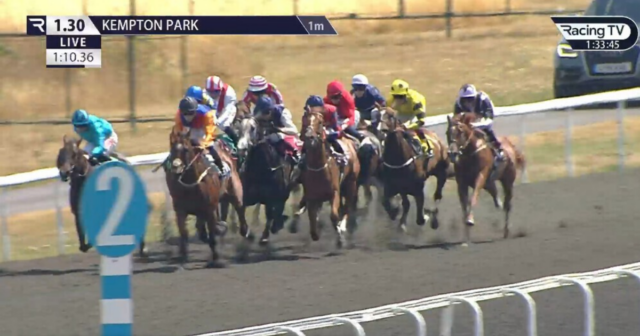 CARNAGE struck Kempton on Monday as two jockeys were sent spiralling across the track in a ‘nasty as hell’ fall.

Bennett was unseated from The Spotlight Kid in the frantically run Class 5 Unibet Support Safe Gambling Handicap over a mile on the all weather.

The horses had rounded the bend for home in the closely packed field when disaster struck.

The James Tate-trained Take A Stand – the 3-1 fav – went down and brought Dean Ivory’s 22-1 chance The Spotlight Kid with him.

Fortunately both jockeys were back on their feet shortly afterwards.

Sun Racing columnist Callan was back in for the next race in fact and steered Fariba to victory over a mile.

That was remarkable considering the chaos which came after the second contest on the day.

At the time of writing it is believed both horses are OK, although Sun Racing will keep you posted with any updates.

One punter said: “That was nasty as hell at Kempton.”

Another wrote: “That looked absolutely awful at Kempton.”

Another said it was ‘really horrible’ seeing falls like that while another commented: “Wow that did not look good.”

Speaking after his fall, brave Callan said: “Most importantly it’s unfortunate for the horse and their connections, but it’s the nature of the sport.

“The horses get the best of equine care.

“Apart from that I took a tumble and the other horse came on top of me.

“I felt fine, I just made sure everything was working at first then I was back up!”

That was not the only flashpoint in the race, as bookies refunded bets on last-placed Zimmer.

The commentator described Zimmer as ‘downing tools’ just as the stalls opened.

Not to worry if you backed the 66-1 no-hoper with William Hill though, as they refunded punts on the horse who finished last by just under 100 lengths.

Did you miss our previous article…
https://www.sportingexcitement.com/horse-racing/im-pals-with-pogba-ronaldo-lebron-a-billionaire-instagram-star-with-15m-followers-step-inside-my-amazing-life/