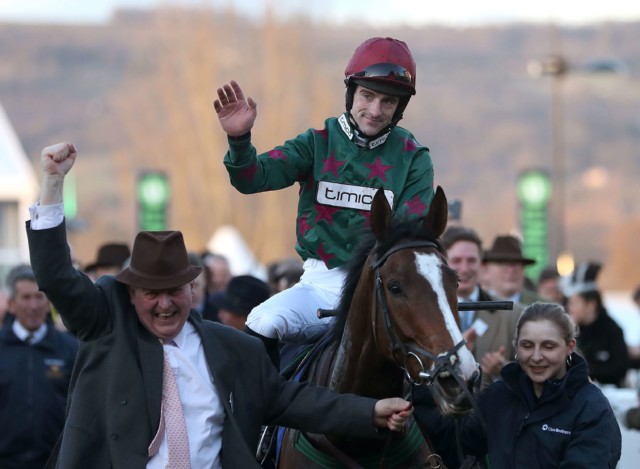 CHAMPION jockey Brian Hughes reckons trainers and riders in the north are looked at as ‘second class citizens.’

Hughes saw off the challenge of Richard Johnson in the championship

And as Waiting Patiently heads to Ascot’s big race on Saturday – the Grade 1 Clarence House Chase – Hughes hopes he can land another blow for those up north.

Hughes, 35, said: “I feel there’s a lot of good trainers, owners and jockeys in the north, and we sort of seem to get looked upon as second-class citizens sometimes.

“I thought me being champion jockey was something everyone in the north could take a bit of credit for.”

Hughes, who leads this year’s title race by 15 from Harry Cobden, would love to showcase his talents more on the big stage.

But he believes his top-level opportunities are more limited because he is based in the north.

On a Great British Racing call, he added: “It’s brilliant when you’re riding lots of winners, but when you look back at your career when you’ve finished, you’d like to have a few big races on your CV.

“I’m lucky to have a horse like Waiting Patiently, but I’ve only got one of him – whereas other jockeys have 10 Grade 1 horses to ride.

And Hughes – who has been in the saddle for all of Waiting Patiently’s starts over fences – reckons the pair can ruffle some more feathers at Ascot.

Hughes said: “He’s an extremely talented horse and extremely versatile. He’s not overly big, but he’s very strong and muscly – and no matter what the trip is, he runs his race.

“We feel he doesn’t get the credit he deserves, because he’s a northern horse, but he’s a very good horse and has run very good horses to small margins when he’s been beaten.

“Hopefully he shows up again on Saturday, and I’m confident he’ll put up a big show.”