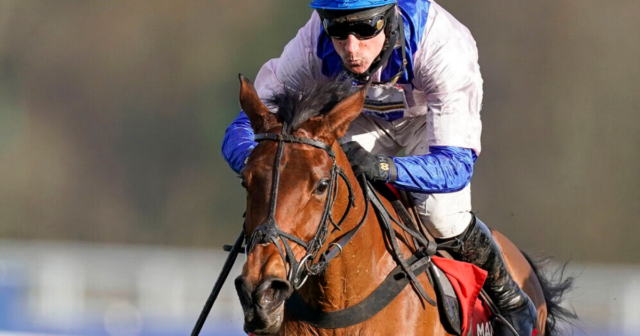 CHAMPION jockey Harry Skelton has signed for SE ahead of the new jumps season.

Every Saturday, the 32-year-old will write his exclusive column in The Favourite, Britain’s biggest and best racing pullout.

He will share his unique insight and opinions and give us the latest news from within the yard of his brother and top trainer Dan Skelton.

The champ had an incredible 2020-21 campaign, riding 152 winners as he secured a first ever jockeys’ title. He bagged five Grade 1 races along the way and enjoyed a big double at the Grand National meeting in April.

He has a top-class stable of horses to call upon over the next few months — starting today as Cheltenham’s Showcase Meeting gets underway.

Skelton said: “It’s great to team up with SE for the 2021-22 season. We always used to get the paper for the racing when I was a kid and still do to this day, so I can’t wait to get started.

“Last year was great and we have some really exciting horses to look forward to this campaign.

“Brian Hughes has got a bit of a headstart in the championship so it’ll be tough to overhaul him, but I will give it my best shot. It should be fun. Hopefully I can put Sunracing fans on to plenty of winners over the winter.”

Read on for Harry’s first column…

CHELTENHAM is back — and so are you punters.

I speak for every jockey in the weighing room when I say we can’t wait to feel the buzz of a big crowd in the shadow of Cleeve Hill again.

It has been a difficult 18 months for us all and last season’s behind-closed-doors Festival was a surreal experience.

Normally the stands are packed with 50,000 and the roar is amazing. Even thinking about it is enough to give every jump jockey goosebumps.

That’s because nothing beats riding a winner in front of the Cheltenham faithful.

And — while there won’t be a Festival-size crowd today — I’m very hopeful I can do just that this afternoon.

I have three big chances on day one of the Showcase Meeting.

First up I have THIRD TIME LUCKI (2.30) over fences for the first time in the squareintheair.com Novices Chase.

He is a horse we have always loved, going back to his early days when he was fourth in the Champion Bumper.

I wouldn’t read too much into his form in the spring — we kept him busy last year and he was feeling it a little towards the end of the season.

We won’t over-race him this time around and he has been schooling well over the bigger obstacles at home. Of course, Cheltenham is a difficult place to make your chasing debut — they are big old fences around there — but he should learn plenty.

He has had a breathing op over the summer and is a horse who we have high hopes for this year.

The classy FAIVOIR (3.40) steps up to two and a half miles after a pleasing win on his chasing debut at Uttoxeter earlier this month.

He is a lovely horse but difficult to get a handle on. He shows you nothing at home but keeps winning on the track. He has to carry a penalty today but is a big, strong lad who we always thought would make up into a chaser.

In the lucky last I get the leg up on JOHN LOCKE (5.25), who was a useful horse on the Flat before joining us last winter. He wasn’t ready to run until the second half of the season and Dan didn’t want to risk losing his novice status in a small race.

So we ran him in Graded company at Kempton and Aintree and he did well, finishing fourth both times.

He has put in plenty of work since then and hopefully it won’t be too long before he is winning a few nice races.

As for the championship this year it will be difficult to rein Brian Hughes back in the jockeys’ standings.

He has got off to a flyer this year and I’ve got a lot of ground to make up.

The reason for this is because we don’t have so many summer horses in the yard these days. Normally we’ve had 50 or 60 winners by the time the jumps season starts proper but there is now a different focus for the yard.

You could say its quality over quantity but that is not strictly true as the numbers are still there. It’s just a shift to aim the horses at the big winter prizes.

The fact I have not been going at it hammer and tongs for the summer jumping schedule has meant I’ve had a bit more time to recharge the batteries which was very welcome.

And I also got the rare chance to enjoy some sport outside of racing — the Euros were great and I got to watch all of Wimbledon.

Of course, the Olympics are very special in our family given my dad Nick’s two gold medals — so watching Tokyo brought back some amazing memories.

But my wife Bridget is looking a lot happier these days now that I’m not under her feet so much anymore.

The jumps season really does start today with the first Cheltenham day and we can all start dreaming.

We are in a great place with a strong squad to go to war with this winter — My Drogo, Nube Negra and Allmankind are just three to watch for.

The dreams are very much alive.