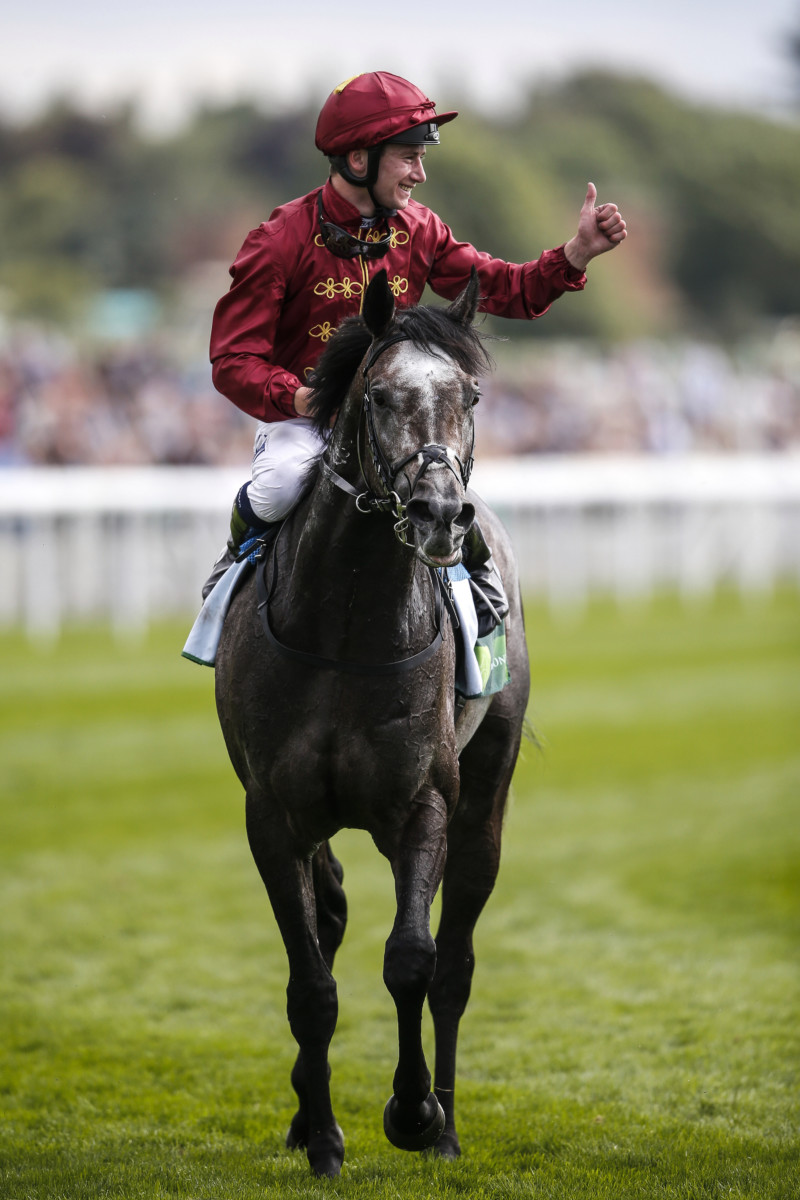 CHAMPION jockey Oisin Murphy is cooped up like the rest of us during the coronavirus lockdown.

He will have plenty of top-class rides to look forward to when racing resumes, including the Derby favourite Kameko.

But if he ever finds himself at a loose-end, he can relive some epic days in the saddle aboard Roaring Lion.

John Gosden’s superstar sadly lost his life last year when struck down by a fatal bout of colic when in New Zealand to cover a full book of mares.

The grey showed class and turned plenty of heads from a young age – and Murphy’s love affair with the horse started in a lowly contest at Kempton.

Murphy recalled: “I was definitely getting excited the day he won by six or seven lengths at Kempton. His work was never super flashy, when he used to do his routine work it was nothing special, he would only do what he needed to.

“The turn of foot that was so evident later in his career wasn’t necessarily there when he was a young horse. I didn’t ride on his debut, but I took over the next time and he really blew me away.”

That prompted the Lion’s pride – owner Sheikh Fahad al Thani, his racing manager David Redvers and Gosden – to aim for something more ambitious.

But the decision to raise their sights would lead to a dark day in the plate for Murphy.

He continued: “He was well worth a crack at a bigger race so we went to the Royal Lodge at Newmarket. It was a small field but he really stuck his neck out, hit the line strongly and really fought for his win.

“At the time it looked like he was crying out for a mile and a half and he was more of a galloping type.

“We went to the Racing Post Trophy after that, and that was a really tough day for me. If I could have another chance on any ride again, it would be that one. Luckily John, Sheikh Fahad and David took the defeat really well.

“The horse was going so well and we hit the front and I thought we were going to go clear. But Saxon Warrior battled back and got us on the line. Really and truly, if I had sat and waited for a few more strides he would have won, and won well. I was beyond gutted.”

But you live and learn, and Murphy came back stronger the following year – much like his favourite horse.

Murphy said: “He muscled up incredibly well over that winter. He was a bit slow to come to hand, we had a very cold winter and he got beat in the Craven.

“On the day, Masar destroyed the field, but he improved spades for it going into the Guineas. I was following the favourite through in that race but we were left a bit isolated inside the final few furlongs and he had to race on his own which was a disaster.

“Thankfully John had the foresight to back him up in the Dante two weeks later, and I had an inkling that he had suddenly turned a corner at home.

“When John got the saddle at York he turned and said to me, ‘what would you like to do?’. I said I would try and get him relaxed and hopefully come through late.

“He just grinned and said, ‘do whatever you like, this lad is absolutely flying’. He was right and Lion was sensational that day, he left some proper horses for dead in a couple of strides. John is a top man to ride for, he did nothing but fill me with confidence the whole way through Lion’s career.”

And for a few seconds, Murphy thought the horse was going to carry him to Derby glory at Epsom.

He continued: “I remember following Masar the whole way in the Derby. I was still on the bridle when everything else was flat out which shows how he developed this unbelievable speed with time and racing.

“I thought I would win at the two-pole and I was almost congratulating myself that I’d held my nerve as well as I could given the occasion. Then I asked him to giddy-up and there was no response. He clearly didn’t stay, he walked across the line, but he ran a blinder.”

From that point on, Roaring Lion would prove the king of the jungle in both Britain and Ireland.

He bagged the Eclipse by a neck in a thriller, breezed to a brilliant win in the Juddmonte International and edged out old sparring partner Saxon Warrior in an epic Irish Champion Stakes – the win that means the most to Murphy.

He said: “The win in the Irish Champion Stakes was very special. It was such a brilliant weekend of racing, Leopardstown was packed and a load of my friends who I only see once a year were there.

“He had a great battle with Saxon Warrior, the pair of them slugged it out so many times during their careers, and the noise from the crowd and the reception was incredible.

“It makes the hairs on the back of your neck stand up. Sheikh Fahad was there and he sponsored the race, it was a great day and the horse was so tough.

“But the time we were most proud of him was his last win at Ascot in the QEII on QIPCO Champions Day. The ground was very testing and he hated every single yard of it.

“I remember taking him down to post as slow as I could to save every ounce of energy. I can’t emphasise the toughness and resolution it took for him to win that day.

“It was a silly race, there was no pace and it was difficult to judge on such testing ground and on a stiff track. I probably gave him a little bit too much to do, but he showed all his heart and really stuck his neck out and got there. He would run through a brick wall for you.”

And now, Murphy will get to watch one of the Lion’s cubs grow up first hand.

He revealed: “Sheikh Fahad and David very kindly allowed me to send a mare to him. Bateel, who is a Group 1 winner, has had a lovely filly foal by Lion.

“I still have him as the screensaver on my phone. We all miss him and I wish he was still here.”