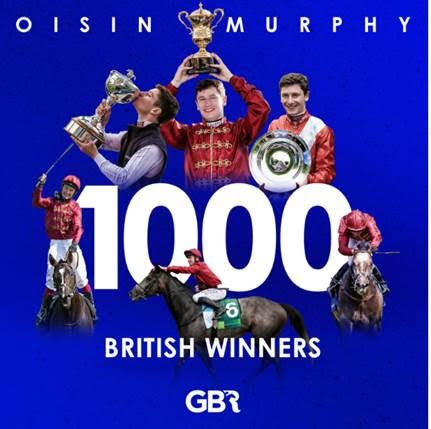 He joins an elite group of jockeys to have reach 1,000 winners including former champion jockeys Frankie Dettori, Ryan Moore and Silvestre de Sousa.

On reaching the landmark, Murphy said: “I’ve been blessed to ride for some fantastic people since the start of my career and it is great to have ridden 1,000 British winners at the age of the 25.

“There has been some amazing highlights amongst the thousand and hopefully I can continue riding winners.”

Among Murphy’s career highlights are 11 British Group 1 victories including three with Roaring Lion and the 2,000 Guineas with Kameko earlier this year.

Trainer Andrew Balding has been a long-time supporter of Murphy and has trained 225 of the jockey’s winners.

The win with Perfect Sign takes Murphy onto 130 wins for the season and 10 clear of second placed William Buick in the Flat Jockeys’ Championship which concludes on November 7 at Doncaster.

Murphy is still waiting to hear the results of the B-sample for a failed drugs test, which could see him suspended for six months.