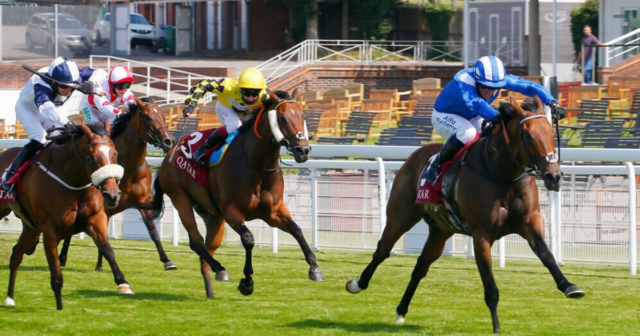 TIME has been called on the career of top sprinter Battaash.

The Charlie Hills-trained flying machine could only finish seventh when chasing an unprecedented fifth win in the King George Stakes at Goodwood on Friday.

It was his second defeat of the season and, after discussions with his owner Sheikha Hissa, the decision was taken to retire him.

The seven-year-old was a tearaway as a young horse but developed into one of the most talented sprinters in the world.

He won four times at Group 1 level, including two Nunthorpe Stakes and a King’s Stand Stakes at Royal Ascot.

He earned almost £1.8 million in prize-money and he holds the 5f track record at York, Sandown and Goodwood.

The popular gelding won each of this three starts in 2020 before suffering a minor fracture which required surgery.

It delayed his return to the track this season and he has been unable to recapture his brilliant best.

Hills said on Twitter: “Thank you Battaash for all the memories – a horse of a lifetime.

“Also a huge thank you to all those who worked closely with him throughout his career.

“It’s certainly been a journey and we couldn’t have done it without you.”

The speedster gained a huge following over the past few years and racing fans paid tribute on social media.

One said: “A racing legend. Thank you Battaash for all the wonderful memories and enjoy a very happy retirement.”

Another added: “Unreal horse. Absolute pleasure to of seen this speedster live most years at Goodwood. Shame he couldn’t of bowed out with a win.”

While another said: “The best ever? Quite possibly in my opinion. On his day he was unbeatable.”