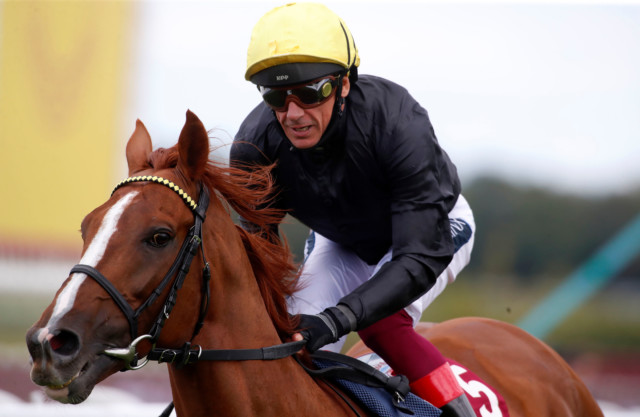 THE FLAT season draws to a close at Ascot on Saturday with British Champions Day.

Heaps of star names are set to clash with Group 1s everywhere you look. We take you through some of the potential big race clashes.

Enable may be gone, but John Gosden is still set to be mob-handed at QIPCO British Champions Day

The stayers get things underway in the opening contest, a marathon over two miles.

Hot favourite Stradivarius should take all the beating back up in trip after his no show in the Arc. Saying that, he was beat in this last season and is short enough again.

Dermot Weld’s Search For A Song would be a big danger but is unlikely to get his ground.

Dream Of Dreams has been a revelation this season and the one to beat in the first Group 1 of the afternoon.

He’ll be short enough in the betting but the sprinting division hasn’t been at his best this season and we know he goes well at Ascot.

Oxted is back after a setback and a repeat of his July Cup run would make him a big threat and a decent bet at 6-1.

One Master will get her ground but is always at her best over an extra furlong. The unexposed Starman is another exciting entry as he puts his unbeaten record on the line.

Onassis and Jouska were late additions after being supplemented following their weekend wins.

There’ll be no Enable, but this should still be a cracker with Aidan O’Brien giving Magical the option of this race and the Champion Stakes.

Ralph Beckett has both Manuela De Vega and Antonia De Vega entered, while Sir Mark Prescott’s Alpinista will be a big player if the ground isn’t too soft.

John Gosden could run Frankly Darling, but the best chance for an Oppenheimer success would be with the Ed Vaughan-trained Dame Malliot.

The Newmarket trainer is set to hand in his licence at the end of the season so it would be an emotional win if she delivers.

John Gosden’s Palace Pier has been one of the star finds of the season and he puts his unbeaten record on the line in this mile showpiece.

He’ll be many peoples idea of a banker and will likely go off strong odds-on, especially if Kameko skips the race for a shot at the Breeders’ Cup.

French raider The Revenant was second in this last year and will be bang there again given conditions. He could be an each-way player at antepost odds.

Circus Maximus could be sent into battle again, while Gosden also has Nazeef and Terebellum entered.

The feature of the day looks a clash between Magical (assuming she heads here) and John Gosden’s Mishriff.

The former saw off Ghaiyyath last time out and won this very race last year.

She is as hardy as it gets but would have to give weight away to three-year-old Mishriff.

Addeybb has a great chance and he’s continued to improve this season. Don’t underestimate him landing his biggest win to date.

William Muir’s Pyledriver looks a big price at double figures and will appreciate dropping back in trip.

Advertisement. Scroll to continue reading.
In this article:Ascot, Newmarket