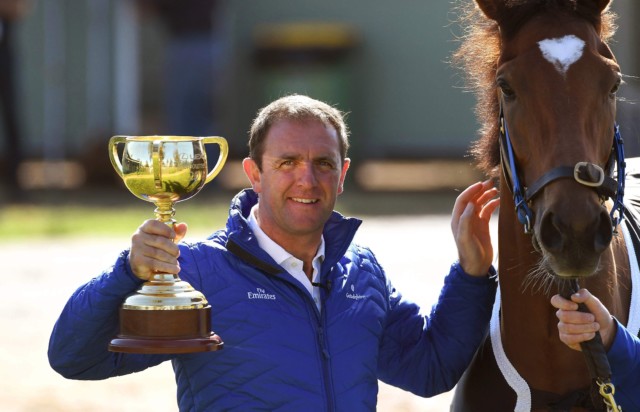 WITH the Flat season finally appearing like it might just get underway, it’s time to get the latest from some of the games big guns.

And what better place to start than with Godolphin operator Charlie Appleby and his thoughts on his runners for the season ahead from Moulton Paddocks.

His first target is the Group 1 Coronation Cup at Newmarket on Friday June 5.

This year, Ghaiyyath comes to his season in Europe physically stronger, with a winter behind him in Dubai, where he won the Dubai Millennium Stakes at Meydan. Now a five-year-old, he is the finished article.

He missed his intended Sheema Classic engagement when the Dubai World Cup meeting was cancelled and he was kept ticking over with routine conditioning work at Mahmoom. He travelled back to UK in late April and he has been in full training since at Moulton Paddocks.

He showed in Dubai that he is back to his best, and next month’s Group 1 Prince Of Wales’s Stakes at Ascot is his next assignment.

Barney Roy showed his class, winning twice at Meydan at the Carnival. His turn-of-foot can be devastating. He will also be on our international team later in the year.

He’s had the winter off. He was Ghaiyyath’s understudy, and when he wasn’t required in Dubai, the decision was taken to freshen him up for a campaign in Europe, where there are plenty of nice races for him.

The Group 2 Hardwicke Stakes at Royal Ascot is a possible early target, and later maybe the Canadian International at Woodbine in October.

He’s a nice horse to have in the stable. He’s part of the family. He, too, is ear-marked for the international squad in the autumn.

He was fresh and well when he went to Riyadh for the Saudi Turf Handicap In February, and he did a bit more than we wanted, he was a bit gassy.

He was fifth, beaten 7 lengths. Obviously, the Gold Cup in Dubai was cancelled and he’s arrived back in UK in good order.

An accomplished international campaigner, Cross Counter won the Melbourne Cup in 2018, he was eighth (beaten a length and a half) last year, and if it is logistically possible, the Cup will be his end-of-year mission once again.

He has worked well at Moulton Paddocks, and we will look at running him in the 2000 Guineas at Newmarket, with a view to stepping him up in trip to run in the Derby.

Al Suhail is a very interesting colt. He has a lot of natural pace, but his pedigree suggests he should stay the Derby trip, he is by Dubawi out an Oaks runner-up.

I was pleased with his second to Military March in the Group 3 Autumn Stakes at Newmarket in October, as he went to the line well and they were seven lengths clear of the third.

The very soft ground caught him out when he finished second to King’s Command in a Group 3 at Saint-Cloud last October. His previous close second to Threat in the Champagne Stakes at Doncaster was a pointer to his potential.

He is a colt with plenty of natural pace, and while we are open minded about his optimum trip long term, the more immediate plan is to go down the sprinting route, starting with the Commonwealth Cup at Royal Ascot next month.

He is a gelded half-brother to Zakouski and he has a lot of talent. He won well on very soft ground in France last start, so his program is largely ground-dependent. For this reason, we will save him for an autumn campaign.

Most of our two-year-olds tend to need a little time to come to hand, and in a normal year, we would be looking to unveil some nice types at the Newmarket July Meeting.

With a later start to the season, it will not make much difference. We may have runners in the Coventry and the Chesham Stakes at Royal Ascot but much depends on the next couple of weeks.

Here are a few names to note, plus some well-bred types yet to be named.

He looks an early type, who should be running very soon.

Has a lot of natural speed and is another possible early comer.

Did you miss our previous article…
https://www.sportingexcitement.com/horse-racing/french-racing-suffers-another-setback-as-government-rules-no-more-racing-in-red-zone-paris-and-north-east