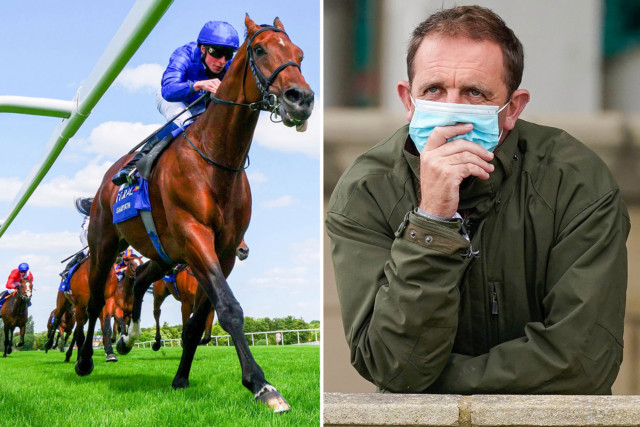 WORLD number one Ghaiyyath has been retired by Godolphin.

Charlie Appleby’s star was set to head to the Breeders’ Cup next month but suffered a setback on the gallops.

The four-year-old will stand at stud after four Group 1 wins, three of which came during the current campaign.

A brilliant hat-trick headlined by the Juddmonte International meant Ghaiyyath was officially rated the best horse in the world on turf.

But connections reported he suffered from muscle soreness after a piece of work in Newmarket.

It’s another blow to the Appleby yard who have also had Pinatubo retired through injury and Space Blues ruled out for the season in recent weeks.

Trainer Appleby said: “Ghaiyyath has had a fantastic career, winning nine of his 13 races.

“His high-class cruising speed and relentless style of galloping was a joy to watch and as I have said before, this year he came together both physically and mentally and looked the finished article.

“It is obviously disappointing not to be taking him to the Breeders’ Cup but the exertions of a long season, which started in Dubai in January, were starting to show and the decision has been made to retire him.”

The Appleby team will be looking for their next star and Vertem Futurity favourite One Ruler could be just that.

He heads the betting for Saturday’s Group 1 at Doncaster after Monday’s entry stage saw 18 put in the mix.

But he’ll have the might of Aidan O’Brien to deal with after the Irish trainer entered a seven-strong team including Wembley.

Advertisement. Scroll to continue reading.
In this article:Doncaster, Newmarket