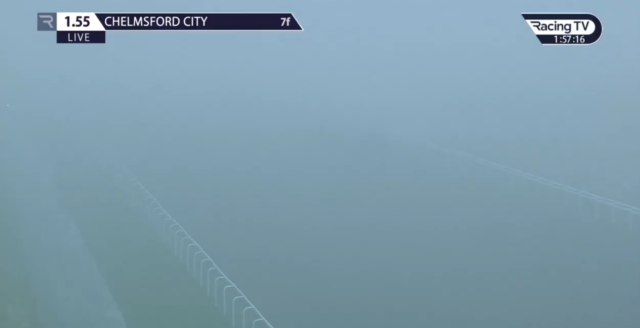 CHELMSFORD racing was abandoned amid safety concerns as thick fog caused chaos for the second day in a row.

Punchestown had four races abandoned yesterday with vision down to almost nothing at the Irish track.

Miss Finland gets off the mark under Robert Havlin in the British Stallion Studs @BritishEBF Maiden Fillies' Stakes. John Gosden the winning trainer.

Punters could not believe racing was allowed to continue given the thick fog – and it had made its way to Chelmsford in Essex by early Monday afternoon.

The scheduled 2.25 race over seven furlongs was delayed – and the prospect of a second abandonment looked a real possibility after that.

The first race – which took place at 1.50 – was run amid rapidly diminishing light, with the commentator having to describe the state of the race ‘when we last saw them’.

One fan said there was no way the rest of the card should take place.

They wrote on Twitter: “Are they loonies at Chelmsford? No way in any shape or form is that sport taking place.”

And just after 2.40pm the racing was officially called off with the safety of the runners and riders of paramount importance.

Did you miss our previous article…
https://www.sportingexcitement.com/horse-racing/racing-fans-confused-by-messed-up-photo-finish-that-mistakenly-shows-three-horses-on-line-rather-than-two